Whether you love him or hate him, it’s undeniable that Kanye West is a constant source of entertainment. Although he rarely grants interviews these days, between his reality television girlfriend, outrageous rants and paparazzi encounters, Kanye seems to have no trouble making headlines almost daily.

After a very public Twitter feud with Jimmy Kimmel—because that’s how people settle their differences these days—Kanye went on the show to set the record straight. With no other guests booked, what ensued was a 22 minute interview that covered everything from his frustrations with celebrity culture and being marginalized by the fashion world to the sources of his creative inspiration.

While Kimmel was noticeably on his toes, Kanye did not hold back. And in true Kanye fashion provided a number of classic quotes that could only come from one of the most polarizing figures in pop culture.

Below we’ve collected some of our favourite moments in quote format from the interview:

4) “I know you’re not supposed to say that about yourself, and I say things the wrong way a lot of times, but my intention is always positive.”

On the importance of cool products:

5) “I spent two of my checks in telemarketing when I was 18-years-old on my first pair of Gucci slippers, and this was before there was H&M and Zara. You couldn’t just find cool stuff when you were growing up, and, for me, I care about cool stuff. It means something to me.”

On why he has no filter

On why he’s actually not a rapper:

On Kim Kardashian being snubbed: 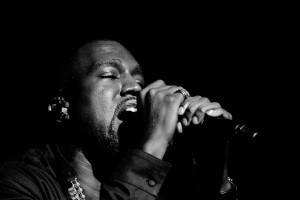 On why he hates the paparazzi:

9) “The way paparazzi talk to me and my family is disrespectful. We bring something of joy to the world. When people hear my music, they have a good time. And I should be respected as such when I walk down the street.”

10) “ Don’t ask me a question about something you saw in the tabloids, don’t try to antagonize me, because you know what, it’s not safe for you in this zoo. Don’t think that I’m not from Chicago for one second.”

On how the paparazzi could be better:

11) “Never think that I’m not from Chicago for one second and think you can walk up and disrespect me and my family constantly. People say, ‘Well, you signed up to be a celebrity, blah blah blah,’ and I understand you gotta get your money, it’s hard out here, but let’s have respect for each other. You do help me get money, paparazzi, you show people how fresh my outfit is.”

13) “Taste, culture, art, just the quality of life, this is what I’m here to do. So when I compare myself to Steve Jobs, Walt Disney, Howard Hughes, David Stern, Michelangelo, da Vinci, Jesus, whoever it is, I say these are my heroes, these are people that I look up to, this is the type of impact I want to make on the Earth.”

On whether sitting on the toilet is a source of inspiration:

On standing your ground as a creative:

15) “Creatives have gotten beat up my entire life. And there’s moments where I stood up to drug dealers in Chicago and said, “You can’t have my publishing. Come and kill me. Do whatever you’re gonna do, but you’re not gonna bully me. You’re not gonna stop me, because my mother told me to believe in myself.”

On why celebrity culture is out of control:

On getting snubbed by the fashion industry:

17) “Who do you know that is known more for clothes than me?”

On the infamous Leather Jogging Pants:

18) “There’s people who made whole careers off of creating leather jogging pants, it became like a phenomenon over the past three years . . . I would sit with Hedi Slimane who is now the head designer of St. Laurent and he’d say, ‘Stop giving these big brands your ideas.'”

On classism being the new racism:

19) “It’s not about racism anymore, it’s classism. Paula Deen, she was old school with it—this classism is what they do to try and say well, you’re a rapper, or, your girl is on a reality show. So you’re not up here with us, we’re old money—I’m not into all that snobbery.”

On why it’s better to be Muhammed Ali

Have any other Kanye quotes that we missed? Let us know in the comments!