Meeting of Brock and Tecumseh, 1812 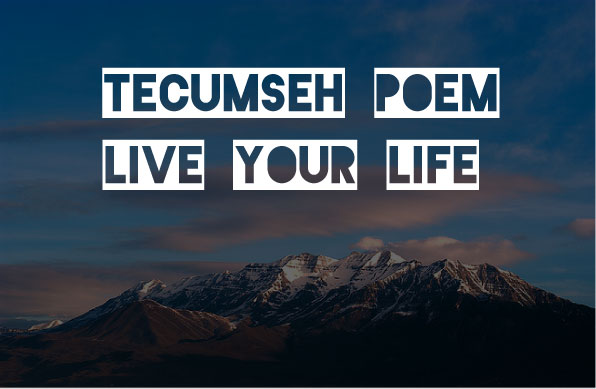 If you’ve recently watched the film “Act of Valor” you may have come across a very powerful Tecumseh poem titled “live your life–filled with inspirational quotes on life.

Tecumseh was a widely respected military leader of the Shawnee based in what would later become modern day Indiana state. In addition to working with other tribes to establish the Tecumseh confederacy, Tecumseh worked tirelessly to minimize the influence of white settlers and establish a protected seperatist land.

He encouraged his followers and fellow tribes to abstain from alcohol, learn to farm becoming self reliant, and avoid trade and land sales to white settlers who were gradually taking over native lands. His frustrations with those who refused his advice came to a head during the battle of 1812 when he aligned with British and Canadian forces to fight against the Americans.
By 1813 the war seemed lost and both British and Canadian troops retreated. Tecumseh continued on but died shortly after that on October 5th, 1813.
He not only left a legacy as a charismatic leader and promoter of Native American independence but a symbol of how one could live life simply, beautifully and in peace.
Below, you will find the poem in its entirety and we’ve included some of our favorites as picture quotes you can use use to share this deeply moving and inspirational work.

So live your life that the fear of death can never enter your heart. Trouble no one about their religion;respect others in their view, and demand that they respect yours. Love your life, perfect your life, beautify all things in your life. Seek to make your life long and its purpose in the service of your people. Prepare a noble death song for the day when you go over the great divide.

Always give a word or a sign of salute when meeting or passing a friend, even a stranger, when in a lonely place. Show respect to all people and grovel to none.

When you arise in the morning give thanks for the food and for the joy of living. If you see no reason for giving thanks, the fault lies only in yourself. Abuse no one and no thing, for abuse turns the wise ones to fools and robs the spirit of its vision.

When it comes your time to die, be not like those whose hearts are filled with the fear of death, so that when their time comes they weep and pray for a little more time to live their lives over again in a different way. Sing your death song and die like a hero going home. 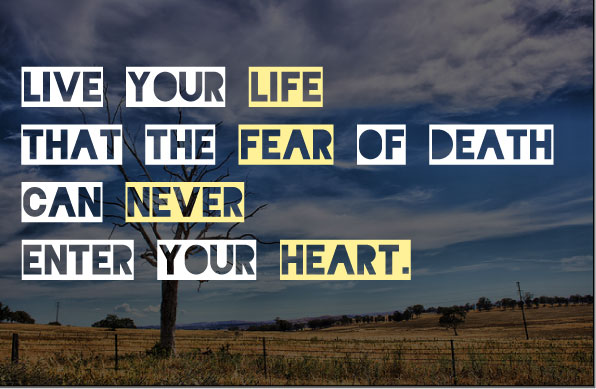