After secretly releasing her self-titled album last year, we compiled a similar list of the best Beyonce quotes from that album. Now, The bey-hive is being bestowed with another gem by the queen herself.

Beyonce’s Lemonade The Visual Album, is being described as

A conceptual project based on every woman’s journey of self knowledge and healing.

It premiered on HBO at 9pm April 23rd and is executive produced by Beyoncé Knowles Carter along with key collaborations from Diplo, Ezra Koenig, Jack White, James Blake, Kendrick Lamar and The Weeknd.

You can stream the album exclusively on TIDAL at:

Narrowing this down to a few quotes – on an album that is getting better by the second – was a huge challenge.

Below, you’ll find our favorite lyrics and lines – from an album filled with anthems – in the order on the album.

1. PRAY YOU CATCH ME

You can taste the dishonesty it’s on your breath

as you pass it off so cavalier. 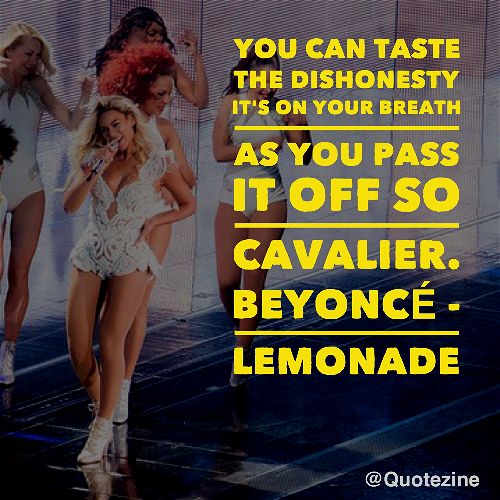 Constantly aware of it all, my lone ear pressed against the walls of your world

Prayin’ I catch you whispering, I’m prayin’ you catch me listening

When it’s only in my memory

because it ain’t right

especially coming up after midnight 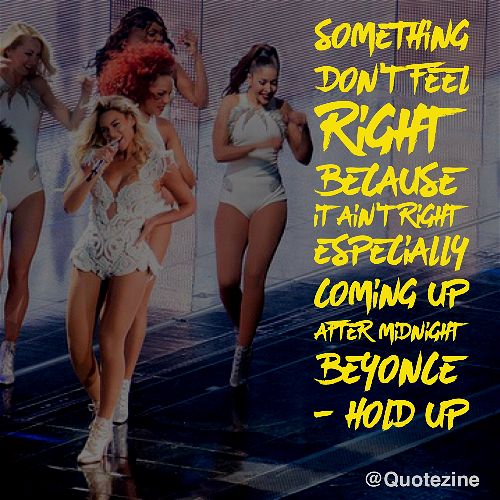 I smell your secret, and I’m not too perfect, to ever feel this worthless

Can’t you see there’s no other man above you, what a wicked way to treat the girl that loves you.

How did it come down to this, going through your call list?

It’s such a shame, you let this good love go to waste. 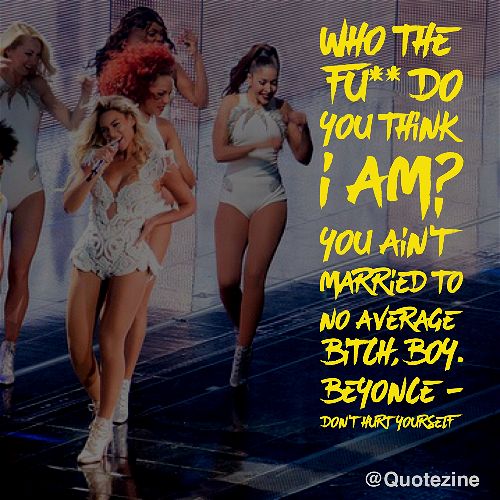 And keep your money, I got my own – get a bigger smile on my face being alone

Fu** you hater, you can’t recreate her.

I smell that fragrance on your Louis V, boy, just give my fat ass a big kiss, boy Tonight I’m fuc**** up all your shi*, boy.

‘Til I realize, I’m just too much for you

This is your final warning, you know I give you life, if you try this shit again, you gon’ lose your wife.

He trying to roll me up, I ain’t picking up

Headed to the club, I ain’t thinking ’bout you. 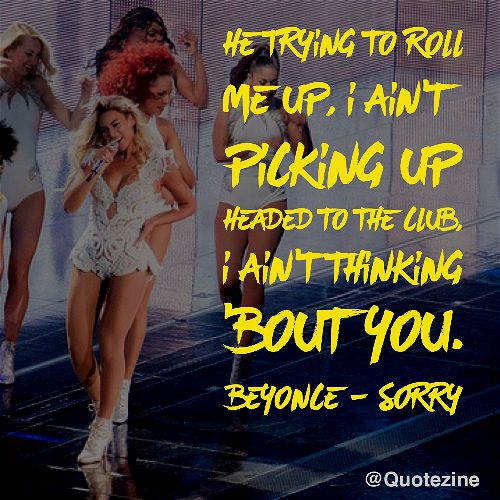 Looking at my watch, he shoulda been home.

Today I regret the night I put that ring on.

He always got them fucking excuses.

I pray to the Lord you reveal what his truth is.

He only want me when I’m not on there.

He better call Becky with the good hair.

She love the way it tastes, that’s her recipe

Rushing through her veins like it’s ecstasy, oh no – The Weeknd

She too smart to crave material things

she pushing herself day and night.

She grinds from Monday to Friday works from Friday to Sunday 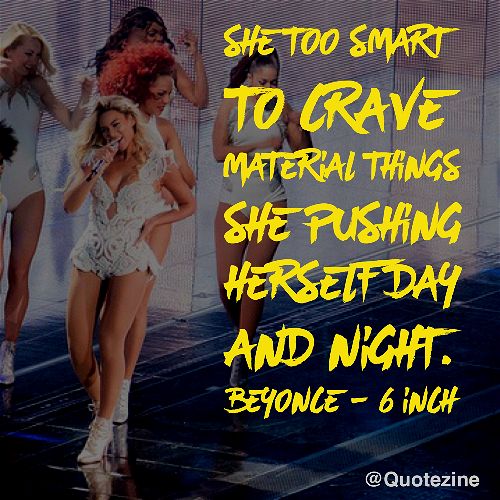 Oh, stars in her eyes

She fights and she sweats those sleepless nights

But she don’t mind, she loves the grind

She grinds from Monday to Friday

Works from Friday to Sunday

Came into this world, Daddy’s little girl and daddy made a soldier out of me.

With his gun, with his head held high

He told me not to cry 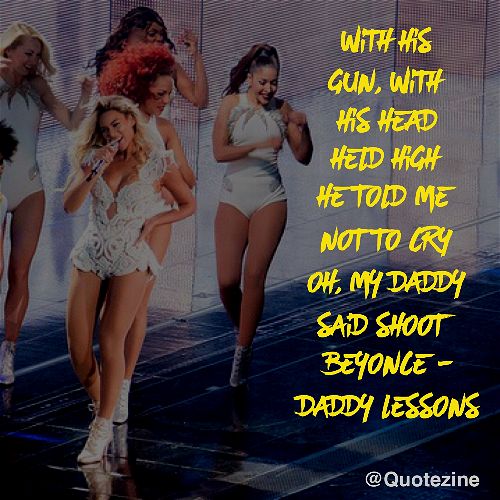 Daddy made me fight

He always played it cool

But daddy was no fool

And right before he died he said remember

Ten times out of nine, I know you’re lying

So I’m trying to be fair 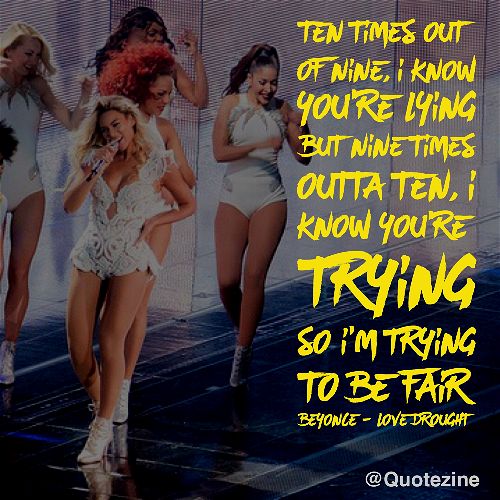 It’s just floating in the air, lookie there

Are you aware you’re my lifeline, are you tryna kill me?

I don’t care about the lights or the beams

Only way to go is up, skin thick, too tough

Nine times out of ten, I’m in my feelings

But ten times out of nine, I’m only human

Tell me, what did I do wrong?

I always paid attention, been devoted

Tell me, what did I do wrong?

Oh, already asked that, my bad

But you my lifeline, think you tryna kill me?

If I wasn’t Bey, would you still feel me?

We built sand castles that washed away

I made you cry when I walked away

And although I promised that I couldn’t stay, baby

Every promise don’t work out that way, oh, babe

Dishes smashed on my counter from our last encounter

Pictures snatched out the frame

Bitch, I scratched out your name and your face

What is it about you that I can’t erase, baby? 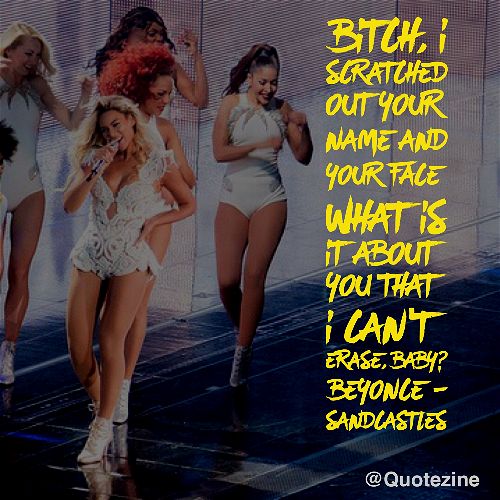 When we made our way ’til now 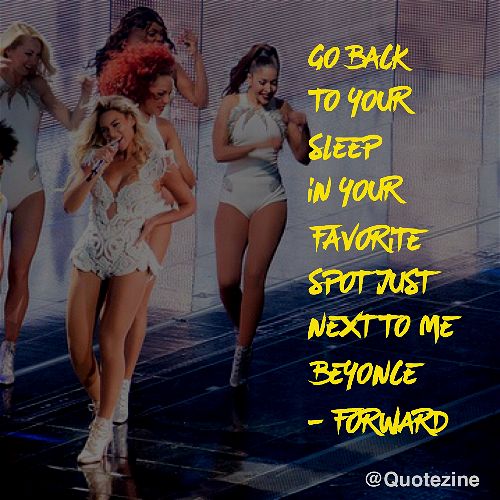 Lord forgive me, I’ve been running

I’m telling these tears, “Go and fall away, fall away”

May the last one burn into flames 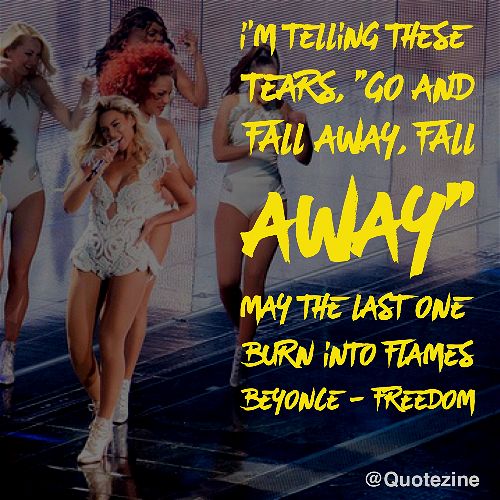 I break chains all by myself

Cause a winner don’t quit on themselves

Eight blocks left, death is around the corner

But mama don’t cry for me, ride for me

Try for me, live for me

Breathe for me, sing for me

I could be more than I gotta be – Kendrick Lamar

I had my ups and downs, but I always find the inner strength to cool myself off. I was served lemons, but I made lemonade – Hattie Mae White

Found the truth beneath your lies

And true love never has to hide

True love never has to hide

I’ll trade your broken wings for mine 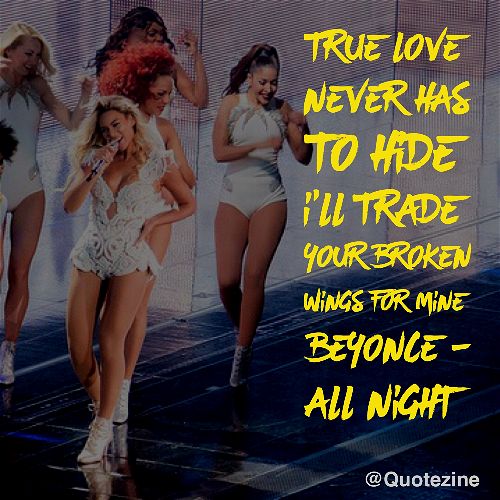 I’ve seen your scars and kissed your crime

Our love was stronger than your pride

Beyond your darkness, I’m your light

To win the war caused by pain, pain

But every diamond has imperfections

But my love’s too pure to watch it chip away

Oh nothing real can be threatened

True love breathes salvation back into me

Produced By Beyoncé & Mike WiLL Made It

Bitch, I’m back by popular demand

I like my negro nose with Jackson Five nostrils

I got a hot sauce in my bag, swag 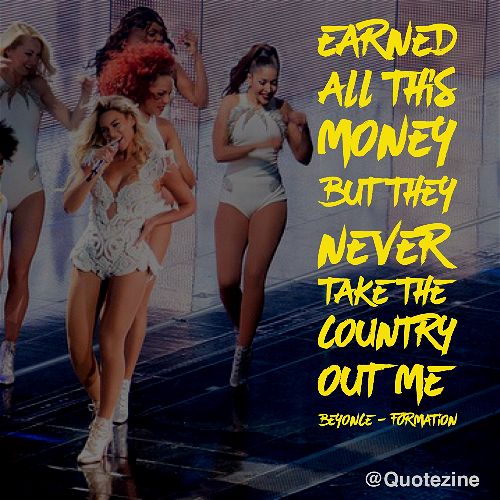 If he hit it right, I might take him on a flight on my chopper, cause I slay

Drop him off at the mall, let him buy some J’s, let him shop up, cause I slay

I twirl on them haters, albino alligators

El Camino with the seat low, sippin’ Cuervo with no chaser

Beyonce Quotes: The 17 Best Lyrics From Her Self Titled New Album

The 55 Best Drake Songs of All-Time

Drake Quotes: The Best Lyrics and Lines from Views

What are your favorite Beyonce Knowles quotes, lyrics or lines from lemonade?

Let us know in the comments.

Images via: noodles and beef