Drake just might be the king of rap quotes. And and after almost three years of waiting, it’s finally here: his fifth solo album VIEWS.

Originally titled VIEWS from the 6, there’s been hints of it’s impending release for months. Singles like “One Dance”, Pop Style, Summer Sixteen and Hotline Bling set the tone along with this quote from Episode 19 of OVO sound radio:

“It’s something that I’ve been working really hard on, myself and 40… Trying to craft a lifestyle track, a sound for our city. Views From The 6 won’t be a short ting. There’s a lot of music on there. You’ll have your full share of Drake music for the summer and for the year. Forever.”

Then, of course, he dropped this trailer to let us know it was real:

Below, are the absolute best lyrics and lines from Drake’s biggest album yet: Views.


And listen to the album below on spotify

Drake Quotes: The Best Lyrics and Lines from Views

Even when it’s business with you, it’s personal, again. 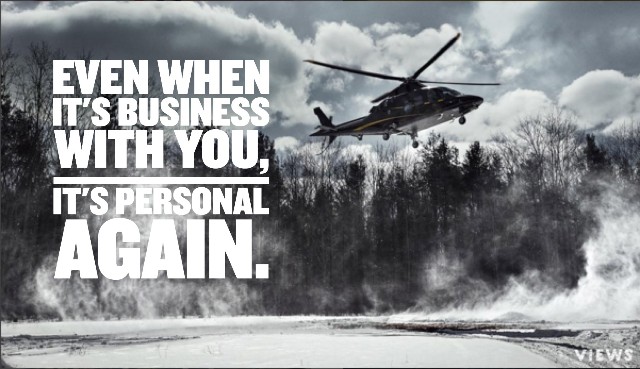 How do you not check on me when things go wrong/

Guess I should’ve tried to keep my family closer/ 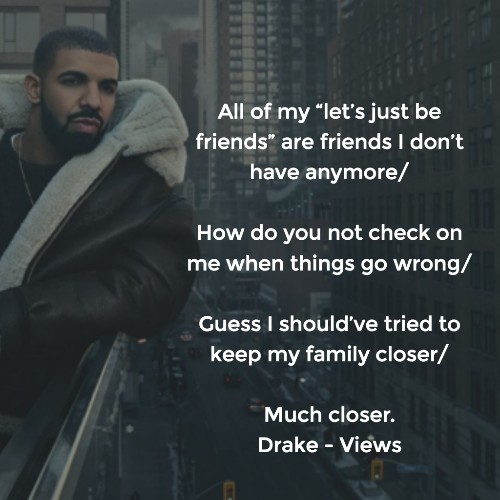 Always saw you for what you could’ve been/

Ever since you met me, like when Chrysler made that one car that looked just like the Bentley”

If I ever loved you I’ll always love you, that’s how I was raised.

Just to show em what it’s like to be alive for it.

And I can’t sleep these days unless I take one/

If they don’t have a story these days, they’ll make one 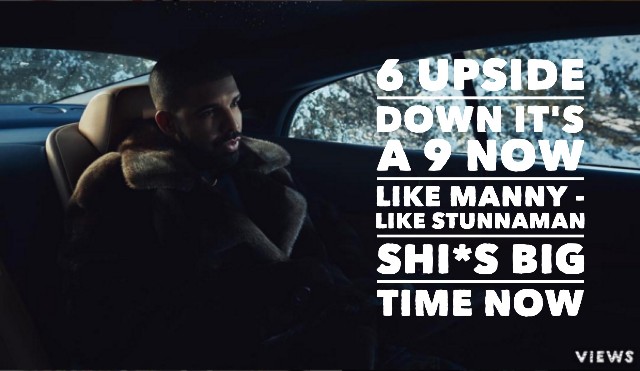 MJ in every way, I just don’t fade away

I got it right now so I’m everybody’s friend/

If I ever lose I bet we never speak again 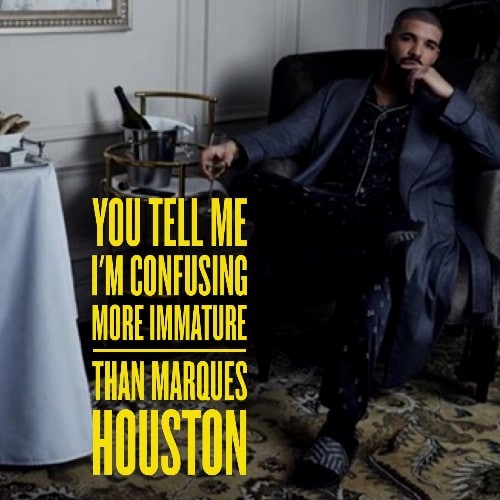 I know you heard that my pool parties like Mardi Gras/

I know you heard that my girl is sponsored by Audemars/

All that grey in our conversation history, you

How’s that for real/

3 dots you thinking of a reaction still/

You send the “are you here?” text without an invite/

You got something that belongs to me/

Your body language says it all/

Despite the things you said to me 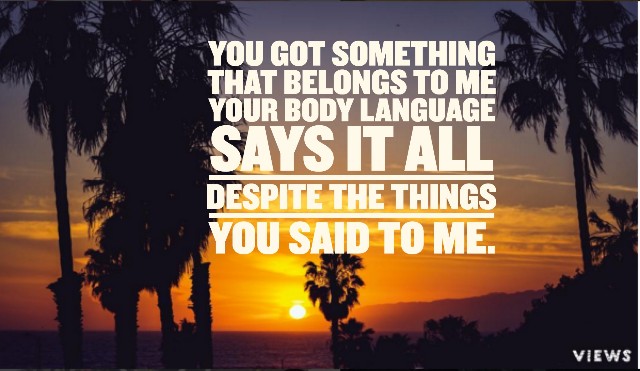 I was only gone for the last few months/

But you don’t have the time to wait on me?

I tried with you/

There’s more to sleeping in and getting high with you.

And that just didn’t sit right with you.

09 they was bidding on me but I’m Young Money got it written on me.

They wan’ be on TV right next to me/

You cannot be right here next to me/

Don’t you see Riri right next to me?” 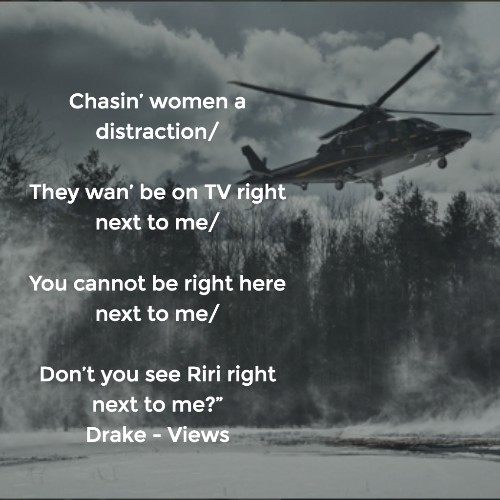 I can not give you the recipe

You know the game is sold separately

They love to talk, me, I’m just done-ing the hype.

I mean you boys not even coming close 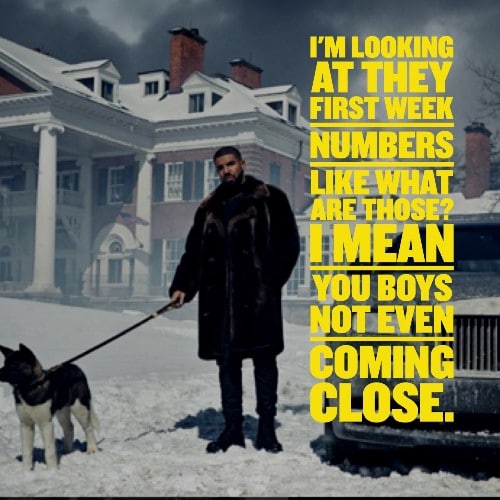 Lookin’ in the mirror I’m closer than I really appear/

Creepin’ like Chilli without the tender, love, and care

The only thing I did to get here was put the work in.

Used to have secret handshakes to confirm my friendships/

Nowadays they just shakin’ my hand to hide the tension

The most successful rapper 35 and under/

I’m assumin’ everybody’s 35 and under/

Don’t get hyped for the moment then start to backpedal

Now the talk at the corner store is I’m TBE –

The best ever don’t ever question you know better

But shi* aint always how it seams when it’s sewed together.

First take Drake, you know I rarely have to take two it/

And they still take to it

I rather listen to someone else/

I gave your nickname to someone else.

I miss the feeling of you missing me

Relationships slowin’ me down, they slow down the vision/

Guess I’m not in a position to deal with commitment.

Not having closure it take a lot out of me

This year for Christmas I just want apologies 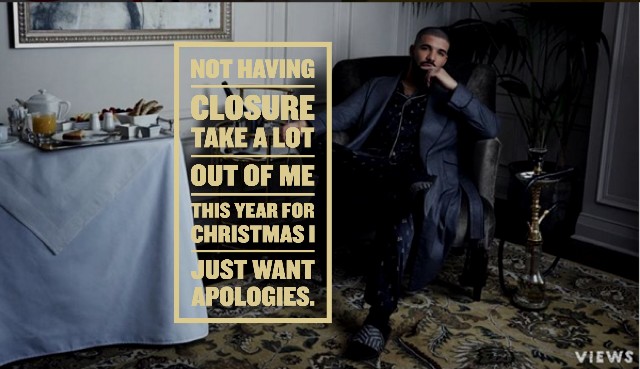 Who’s gonna save me when I need savin’?/

Since Take Care, I’ve been caretakin.

Looking for things you can find

Just so you can have something you can bring up when it’s time.

Mixing vodka and emotions, tapping into your emotions/

That pu*** knows me better than I know myself.

Having you coming all summer like a season pass

Cause you talk like you got what I need/

You talk like you got the juice and the squeeze” 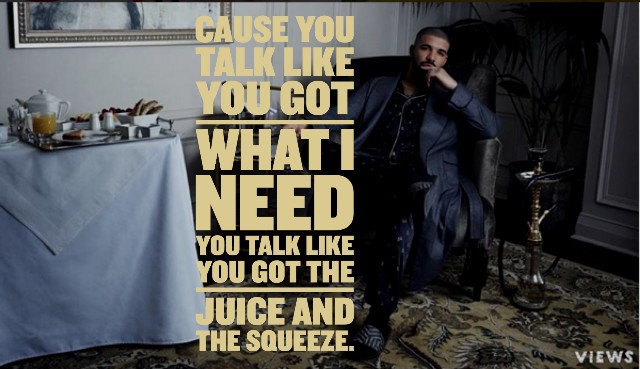 Blew up and I’m in the city, still. 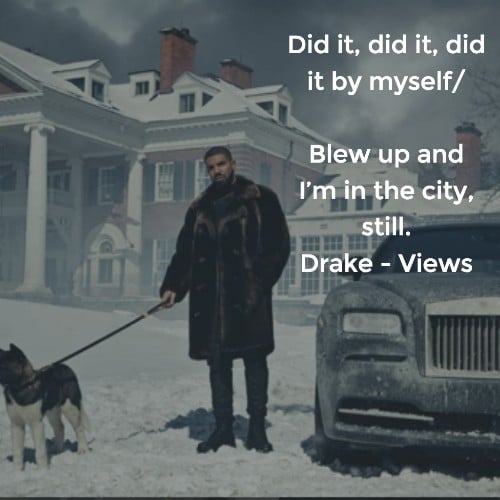 I can’t tell you if she’s yours or mine, but I do know. 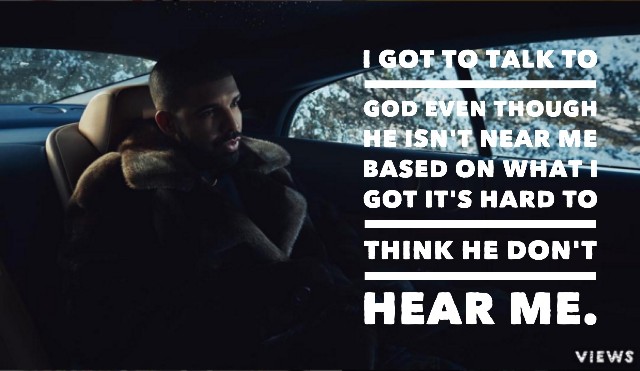 I thank God you came/

How many more days could I wait? 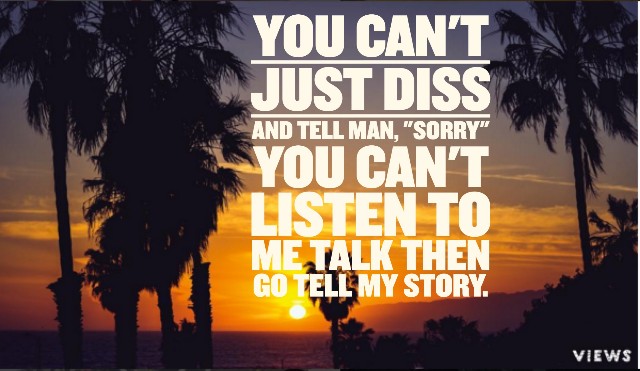 All that I’m wishing for my friends”

You know you gotta stick by me

Soon as you see the text – reply me.

Y’all a whole lot of things/

But you still ain’t this” 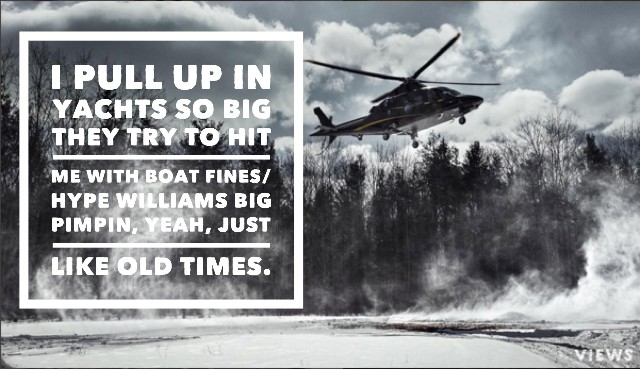 OVO we a gold mine/

We going gold in no time.

You don’t want to fall in love, I know/

I’m not someone you should trust, I know/

I give Chanel out like a hug, I know. 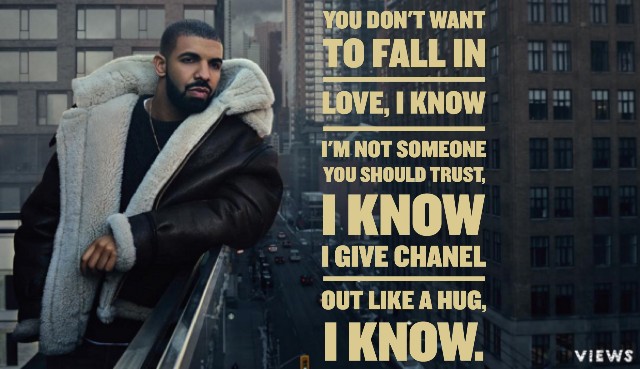 Lie-ing to protect you, I be doing that a lot

Got so many chains they call me Chaining Tatum.

Cannot be me I’m a one of one/ 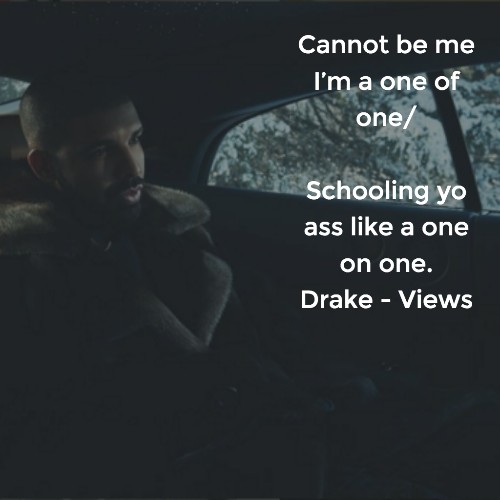 See me putting in the hard work now/

I decide when I start work now.

Lot of y’all ain’t built for the league, yeah/

Trade you off the team while you in your sleep, yeah/

Y’all showed me that nothing’s guaranteed”

My friends always feel the need to tell me things/

Seems like they’re just happier than us these days.

Years go by too fast/

How long did we last?

I feel bad for asking.

Days in the sun and nights in the rain/

Summer is over simple and plain.

Cause we never decided/

You a real ass woman and I like it.

We both a different breed/

I’m followin’ your lead, I ask you what you need/

And my wifey is a spice like I’m David Beckham/

And I know who gon take the fall with me/

They right here on call with me/

They all with me.

You could throw curve balls but I got the glove fitted/

They been saying it’s love, but it isn’t love, is it?

Fu** being all buddy, buddy with the opposition/

It’s like the front of the plane, ni**a, it’s all business/

But I haven’t flown with y’all boys in a minute.

Look, they’d rather run up on me than towards they goals/

Who you think running the show?/ 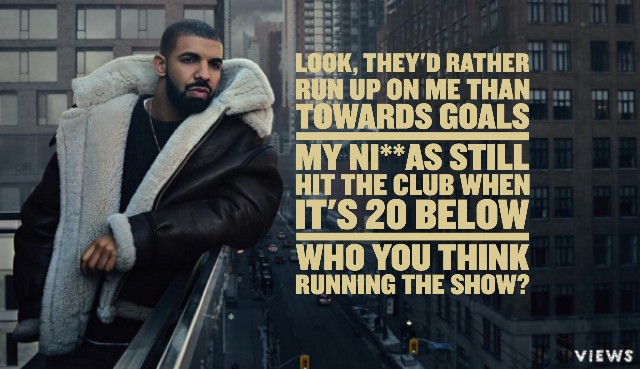 The lingo starting to sound like we talking in code.

Now me and Kobe doing shots the night before the game/

Still drop 40 with liquor in my system.

Niggas quick to double cross like both of us Christian

And I’d never bend my morals for the ticket sales.

I’m put it all behind us.

Cause ever since I left the city, you

Glasses of champagne out on the dance floor

Hangin’ with some girls I’ve never seen before

These days, all I do is/

Wonder if you’re bendin’ over backwards for someone else/

Wonder if you’re rolling up a Backwoods for someone else/

Doing things I taught you, gettin’ nasty for someone else. 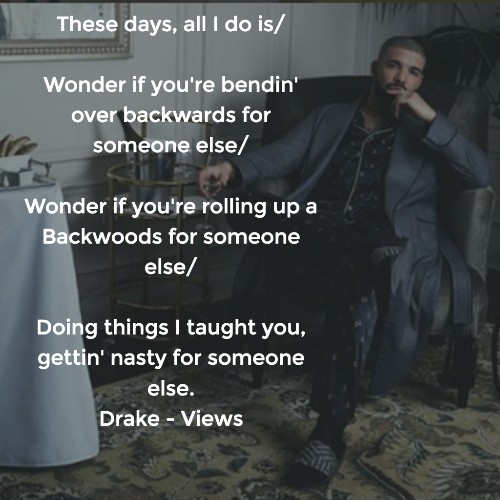 The 55 Best Drake Songs of All-Time

What are your favorite lyrics and lines from Drake’s new album Views.

Let us know in the comments.