It’s official, The Weeknd is back with more slick one-liners and quotes on this year’s Starboy, the hottest album behind Drake’s Views, with the second most simultaneous entries into the Hot 100.

Starboy is the third studio album by the Canadian singer and songwriter, and it was released on November 25th, 2016, by XO and Republic Records. The album features guest appearances from Daft Punk, Lana Del Rey, Future, and Kendrick Lamar.

The Best Starboy Quotes by The Weeknd

All red Lamb’ just to tease you, ah

None of these toys on lease too, ah

Made your whole year in a week too, yah

Main bitch out your league too, ah

Side bitch out of your league too, ah 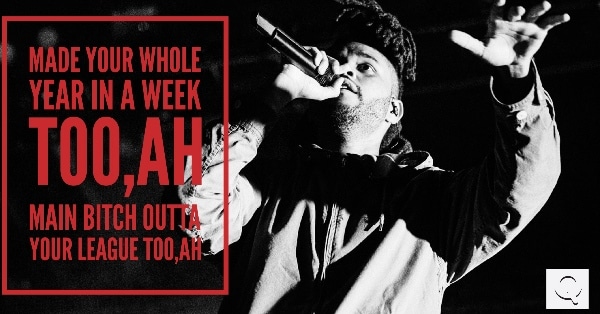 Coming for the king, that’s a far cry, ah

I come alive in the fall time, I

No competition, I don’t really listen

Know it’s been a while, now I’m mixing up the drank

I’m like, got up, thank the Lord for the day

Woke up by a girl, I don’t even know her name

I’ve seen him outside tryna reach her

You tryna leave him, you said I’m the reason

Say you’re mine, I’m yours for the night

All red dress with the devil eyes (she loves)

So obsessed with the camera lights (she loves)

You love her, but you can’t deny (she loves)

The truth, the truth

Diamonds and the rings are her fantasy (she loves)

She chase hearts with the Hennessy (she loves)

You love her, but you’ll never be (she loves)

She always leaves the man she loves

But the diamonds are forever

She always seems to be alone

But the diamonds make it better

If it ain’t XO then it gotta go

I just won a new award for a kids show

Talking ’bout a face numbing off a bag of blow

Every time you try to forget who I am

I’ll be right there to remind you again

Yeah, people always talk about the ones that got away

Why would you wanna take away from this moment?

We can own it

You told me not to worry ’bout

Those guys, those guys

You told me that you left it all behind

I catch you every time

Every time you close your eyes

You can’t hide it

You can’t be the one

So if I love you

It’d be just for you

So when I’m touching you

Can I trust in you?

Paint me a picture with your true colors

These are the questions of a new lover

Baby, show me you’re a keeper

It’s been hard for me to keep up

You’ve been tryna keep me in the dark

But baby girl, I see you

I had a vision

A vision of my nails in the kitchen

Scratching counter tops, I was screaming 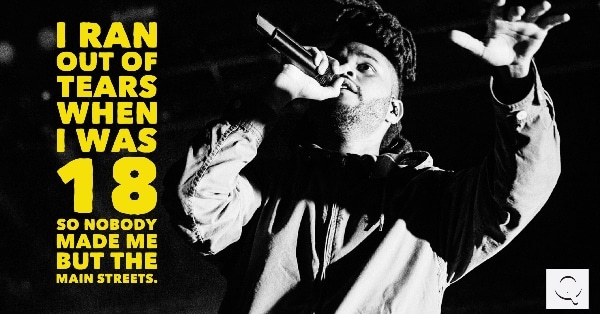 So nobody made me but the main streets

‘Cause too many people think they made me

Well, if they really made me then replace me

Every time you see me pulling up in Aventadors

Just know we been grinding on them sidewalks

I come from murder one, brung late night melee

We hung all summer, sprung mattress with bae bae

Ask around about her

She don’t get emotional

Kill off all her feelings

That’s why she ain’t approachable

She ain’t got time for lovin’ (Lovin’)

She rather die in lusting (Lusting)

She rather die in the club, ’til she

She don’t depend on anybody

Know just what to do with her own body

She don’t give a fuck about nobody

It has begun again, my friend

In this room, we are nothing but strangers in a bed

I feel there’s someone else

Worth your time, from the start

He’s just one call away

From your mind, and your heart

Why would you wanna bring somethin’ between us

Why would you wanna use a life to keep us

To keep us together, oh oh oh ah

Baby girl I loved you on a lonely night, oh

It was the only time

And if I led you on then I apologize

Tell me how to love, it’s been so long

When a call’s not enough, and you just need to touch

Thinking twice on my one

But you just need to trust

Heaven in her mouth, got a hell of a tongue

Heaven knows that I’ve been told

Paid for the life that I chose

If I could, I’d trade it all

Trade it for a halo

And she said that she’ll pray for me

I realized, I belong to you

I feel the darkness run away from you, eh

Don’t stop your lovin’, walk out on me

Don’t stop for nothin’, you’re what I bleed

I learned to love you, the way you need

‘Cause I know what’s pain, this is not the same

I was too busy tryna find you with someone else

The one I couldn’t stand to be with was myself

Don’t stop your lovin’, it’s all I have

‘Cause I can’t function, no I won’t last

I swear I’ll love you just like the past

‘Cause I know what’s pain, this is not the same

The reasons I can’t have you, are so easy to fix

I didn’t really plan to, but I’mma do it for this

The reasons I can’t have you, isn’t so complicated

Baby if you let me I won’t hesitate

I just can’t say I don’t love you

‘Cause I love you, yeah

But baby girl, I’m not blamin’ you

Just don’t blame me too, yeah

‘Cause I can’t take this pain forever

And you won’t find no one that’s better

I can see it in your eyes

‘Cause they never tell me lies

I can feel that body shake

And the heat between your legs

You don’t have to run, I know what you’ve been through

Just a simple touch and it can set you free

What were your favorite lyrics or lines from the Starboy album? Let us know in the comments.