Wardell Stephen “Steph” Curry II is not only the best shooter in NBA history, he’s now officially a two-time NBA MVP. Given his accomplishments over the last two years, this is hardly a surprise.

In the 2014-2015 season, Curry won the MVP after a fantastic season leading the Golden State Warriors to a franchise record for wins, and their first NBA championship since 1975.

This year, he took things a step further leading the Warriors to the best record in NBA history AND he became the first player to lead the league in scoring while shooting 50-40-90(50% for field goals, 40% for three-pointers, and 90% for free throws).

It’s a little early to dethrone guys like Michael, Magic and Lebron but it’s hard to dispute that he’s on a path to being one of the greatest players ever.

As if being an incredibly talented athlete weren’t enough, he’s a thoughtful, introspective and inspiring person whose advice about family and faith are truly motivational.

Below are some of the best Steph Curry quotes we’ve come across so far.


Quotes About Success In Life:

1. Be prepared to work harder than anyone else:

“If you take time to realize what your dream is and what you really want in life — no matter what it is, whether it’s sports or in other fields — you have to realize that there is always work to do, and you want to be the hardest working person in whatever you do, and you put yourself in a position to be successful. And you have to have a passion about what you do.” – Stephen Curry 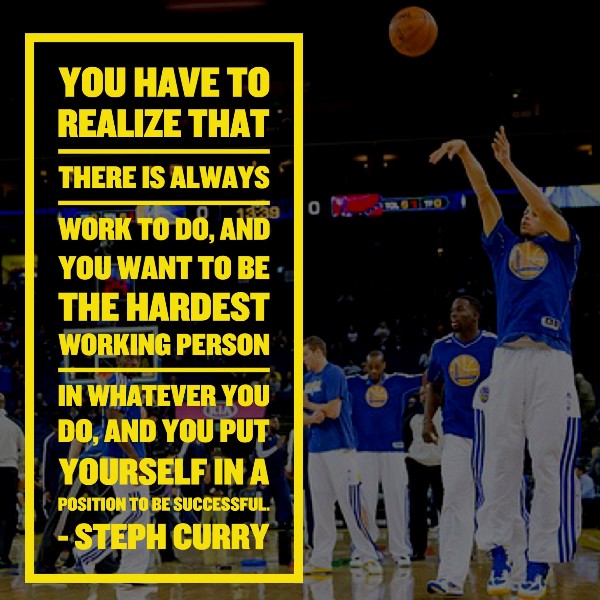 2. Being passionate about your craft will help you stay focused:

“Sometimes people make it seem like you have to have certain prerequisites or a crazy life story in order to be successful in this world. But the truth is you really don’t. It doesn’t matter where you come from, what you have or don’t have, what you lack or what you have too much of, but all you need to have is faith in God, an undying passion for what you do and what you choose to do in this life, and a relentless drive and the will to do whatever it takes to be successful in whatever you put your mind to.” – Stephen Curry

3. And you will need a mix of these three qualities:

“Success is born out of faith, an undying passion, and a relentless drive.” – Stephen Curry 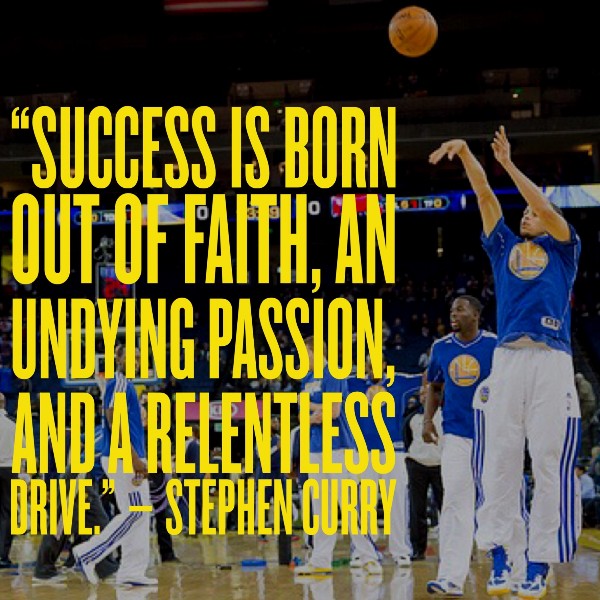 “Success comes after you conquer your biggest obstacles and hurdles.” – Stephen Curry

“There’s more to me than just this jersey I wear.” – Stephen Curry

6. Failure is what makes success so sweet:

“If you don’t fall how are you going to know what getting up is like.” – Stephen Curry 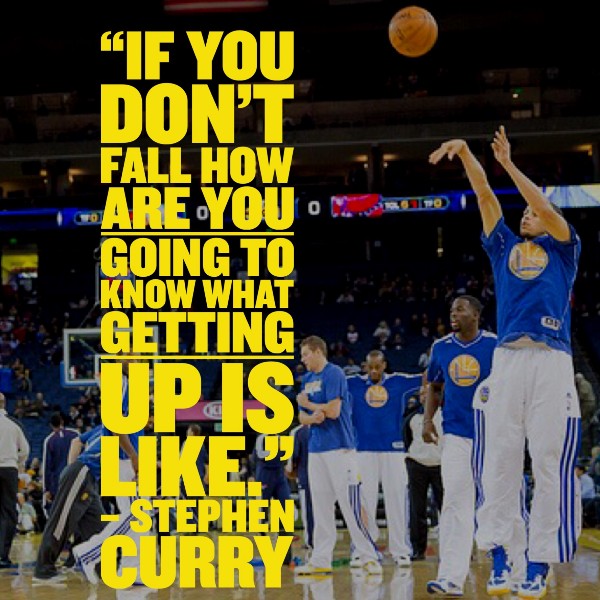 7. It won’t happen by accident:

“Success is not an accident, success is actually a choice.” – Stephen Curry

8. Be comfortable with risk:

“I’m not the guy who’s afraid of failure. I like to take risks, take the big shot and all that.” – Stephen Curry

9. Be confident by being prepared:

“I’ve never been afraid of big moments. I get butterflies.. I get nervous and anxious, but I think those are all good signs that I’m ready for the moment.” – Stephen Curry 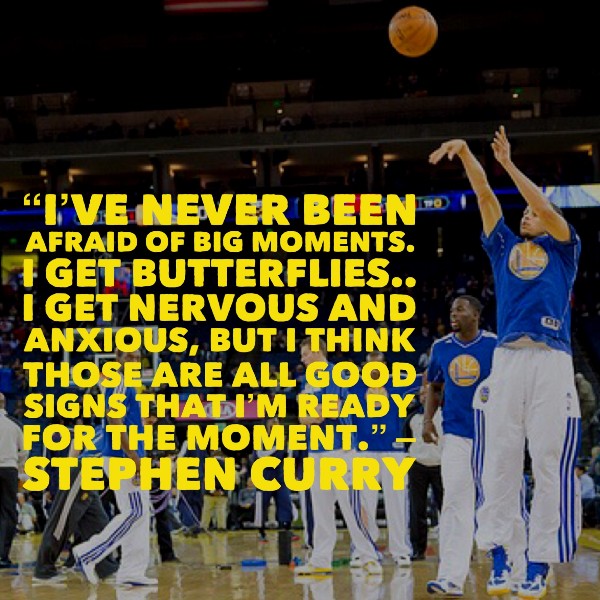 “Be the best version of yourself in anything you do. You don’t have to live anybody else’s story.” – Stephen Curry

11. On the benefits of being a father:

Kids put life into perspective. I never have a bad day. Life happens and you get bad news sometime, or things don’t go your way at work – for me that might mean I lose a game or not play well – but that doesn’t affect my mood from day to day. I love going home and seeing the smiles on my daughters’ faces being happy to see me, and that makes everything all right. – Stephen Curry

12. On the importance of family:

“There’s more to life than basketball. The most important thing is your family and taking care of each other and loving each other no matter what.” – Stephen Curry 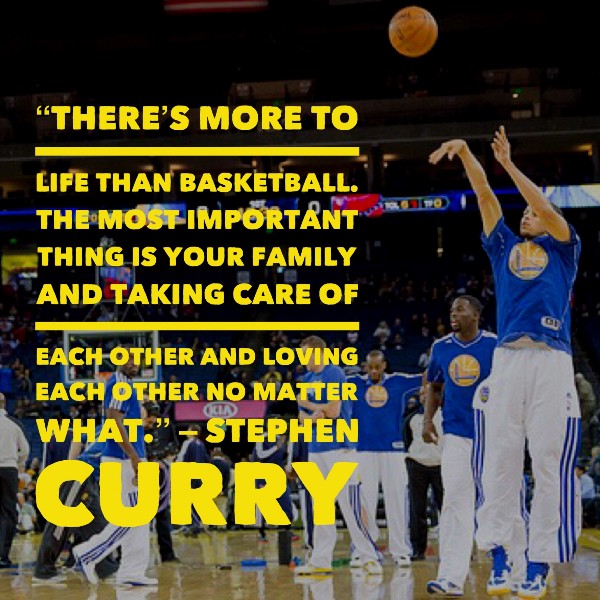 13. Be comfortable with the afterlife:

“I know I have a place in Heaven waiting for me because of Him, and that’s something no earthly prize or trophy could ever top.” – Stephen Curry

14. You need to have faith:
Doesn’t matter where you come from, what you have or don’t have… All you need to have is faith in God, and undying passion for what you do, what you choose to do in this life, and a relentless drive and the will to do whatever it takes to be successful at whatever you put your mind to. – Stephen Curry

15. Be true to your connection:

“I try and use every game as an opportunity to witness… When I step on the floor people should know who I represent, who I believe in.” – Stephen Curry 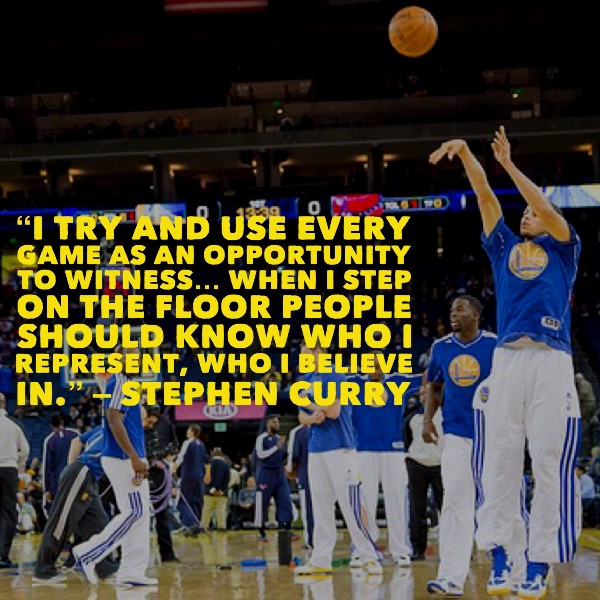 “I do a little sign on the court every time I make a shot or a good pass and I pound my chest and point to the sky – it symbolizes that I have a heart for God. It’s something that my mom and I came up with in college and I do it every time I step on the floor as a reminder of who I’m playing for.” – Stephen Curry

17. Continue on the path by being unsatisfied:

“I really cherish everything that basketball brings; and I think, for me, it’s been a great ride and I’m not done yet…” – Stephen Curry

18. Visualize it and get started as early as possible:

“I love playing basketball; there’s no doubt about it. It’s something I’ve been doing since — what, mom and dad, two? With Fisher-Price goals. My grandma’s here; we were talking about it yesterday. She used to be my commentator. She used to be Bob Fitzgerald for me counting down the scores. I hit a game-winning shot or whatever, and I’d stumble over and give her a high five, stuff like that.” – Stephen Curry 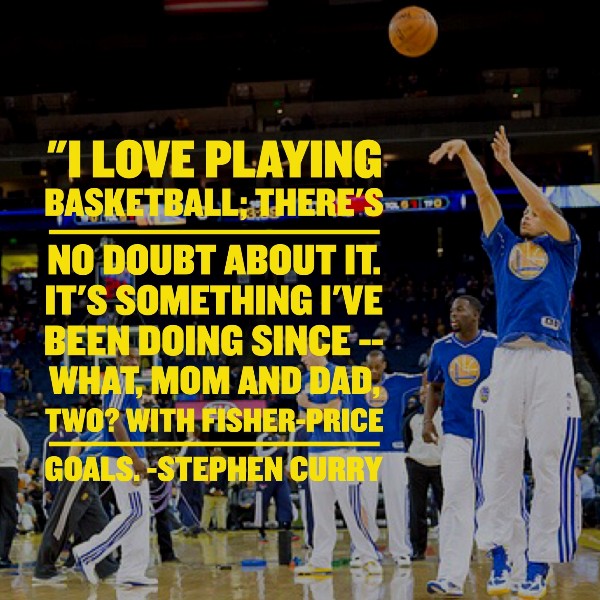 “I can’t say enough, how important my faith is to how I play the game and who I am.” – Stephen Curry

20. You’ll have to believe in yourself before anyone else will:

“When it come to basketball, I was always the smallest kid on my team. I had a terrible, ugly, catapult shot from the time I was 14 because I wasn’t strong enough to shoot over my head, and I had to reconstruct that over the summer and it was the worst three months of my life. You’d think there are no hurdles or obstacles that I had to overcome, but even when I got to high school I wasn’t ranked. I wasn’t ranked. I wasn’t highly touted as a high school prospect. I had nobody really running, knocking on my door saying “Please, please, please come play for our school,” – Stephen Curry

Quotes on Success in Basketball:

21. “Every time I rise up, I have confidence that I’m going to make it.” – Stephen Curry 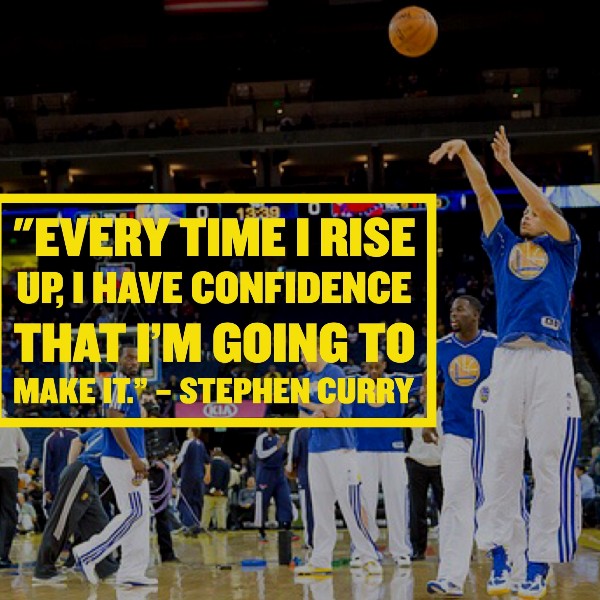 22. On the importance of practice:

“I want to practice to the point where it’s almost uncomfortable how fast you shoot, so that in the game things kind of slow down.” – Stephen Curry

23. Unwavering belief in yourself:

“I can get better. I haven’t reached my ceiling yet on how well I can shoot the basketball.” – Stephen Curry

“Basketball isn’t just a sport. It is an art, one that must be mastered to succeed.” – Stephen Curry 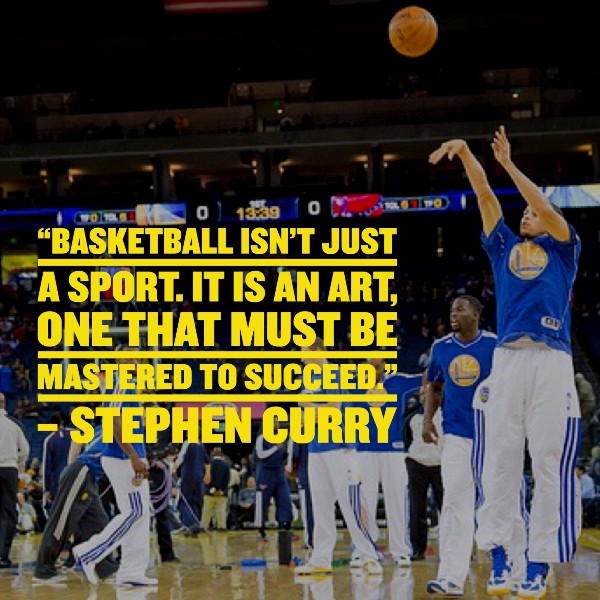 25. Winning isn’t enough if it isn’t for the biggest prize:

“I’d rather be a non-All-Star playing in the Western Conference finals than an All-Star who’s sitting at home in May.” – Stephen Curry

26. Strive to be the best your entire career:

“Being a superstar means you’ve reached your potential, and I don’t think I’ve reached my potential as a basketball player and as a leader yet.” – Stephen Curry

27. Focus on what you can accomplish today:

“Make sure you live in the moment and work your butt off every single day, and I hope I inspire people all around the world to just be themselves, be humble and be grateful for all the blessings in your life.” – Stephen Curry 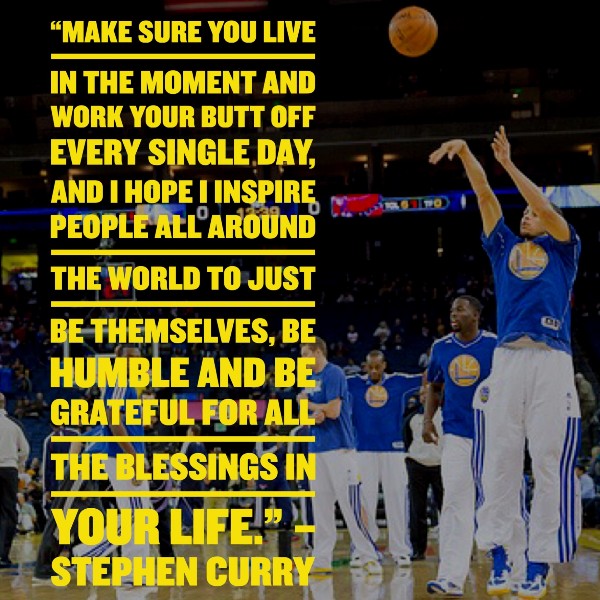 Bonus: Check out All 402 three-pointers Steph made in the 2016 season.

What are your favorite Stephen Curry Quotes? Let us know in the comments.