“One thing I’ve learned about the press is that they’re always hungry for a good story, and the more sensational the better. … The point is that if you are a little different, or a little outrageous, or if you do things that are bold or controversial, the press is going to write about you.”

Could there be a better explanation for the current success of one Donald J. Trump?

Below are the rest of our favorites; the most politically incorrect, uncomfortable and offensive quotes from the most captivating political candidate ever.

On how to treat a lady: 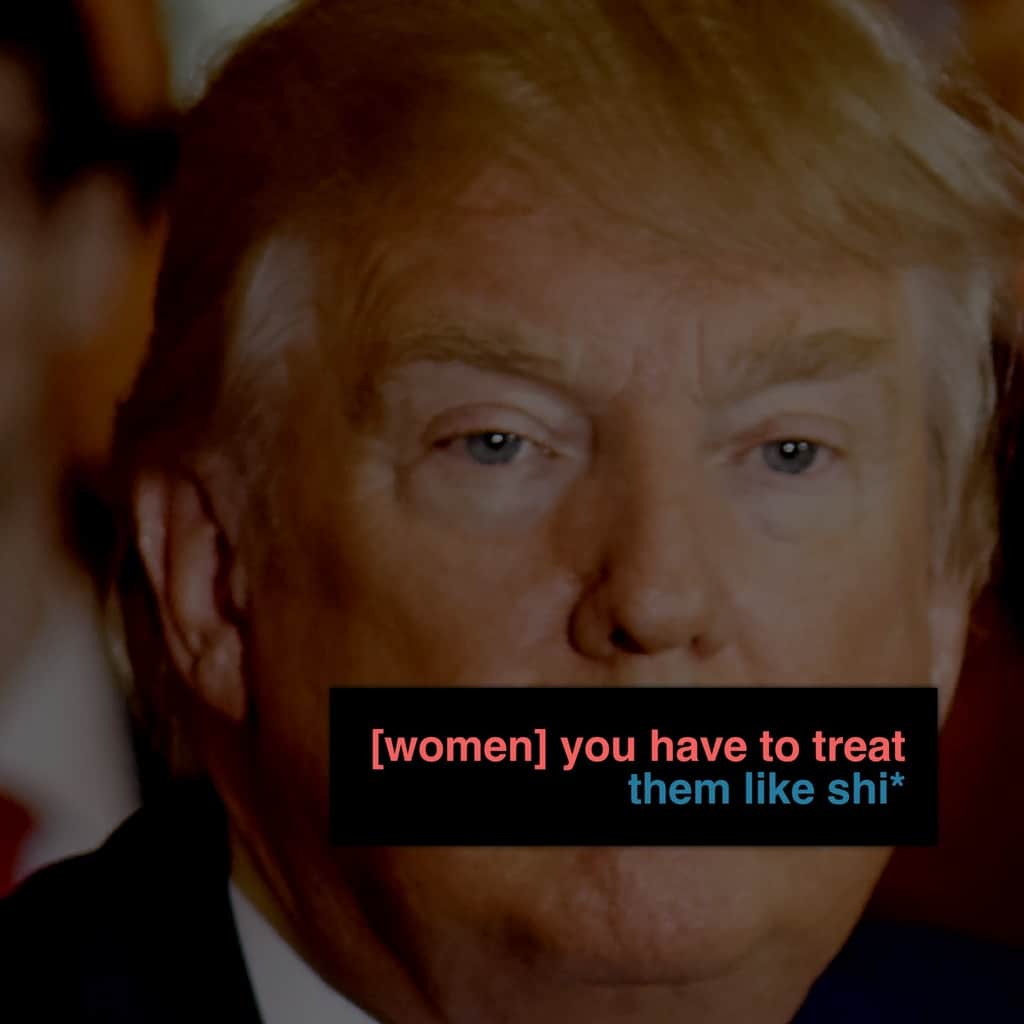 On being irresistible to women:

“All the women on The Apprentice flirted with me — consciously or unconsciously. That’s to be expected.” – Donald Trump

On creating opportunities for women:

“I have really given a lot of women great opportunity. Unfortunately, after they are a star, the fun is over for me.” – Donald Trump

On women being worse than men:

“There’s nothing I love more than women, but they’re really a lot different than portrayed. They are far worse than men, far more aggressive.” – Donald Trump

“If Hillary Clinton can’t satisfy her husband what makes her think she can satisfy America?” – Donald Trump

@ariannahuff is unattractive both inside and out. I fully understand why her former husband left her for a man- he made a good decision. – Donald Trump

“Public funding of abortion providers is an insult to people of conscience at the least and an affront to good governance at best.” – Donald Trump

To a female lawyer who needed a break to breastfeed:

“Oftentimes when I was sleeping with one of the top women in the world I would say to myself, thinking about me as a boy from Queens, ‘Can you believe what I am getting?’”– Donald Trump (Think Big: Make it Happen in Business and Life, 2008)

“Angelina Jolie is sort of amazing because everyone thinks she’s like this great beauty. And I’m not saying she’s an unattractive woman, but she’s not a beauty, by any stretch of the imagination. I really understand beauty.”– Donald Trump (CNN, Oct. 9, 2006)

“I would never buy Ivana any decent jewels or pictures. Why give her negotiable assets?”– Donald Trump (Vanity Fair, September 1990)

“It’s all in the hunt and once you get it, it loses some of its energy. I think competitive, successful men feel that way about women. Don’t you agree? Really, don’t you agree?”– Donald Trump (TrumpNation: The Art of Being The Donald, 2005)

How he lives with himself:

“You know, it really doesn’t matter what the media write as long as you’ve got a young and beautiful piece of ass.” – Donald Trump 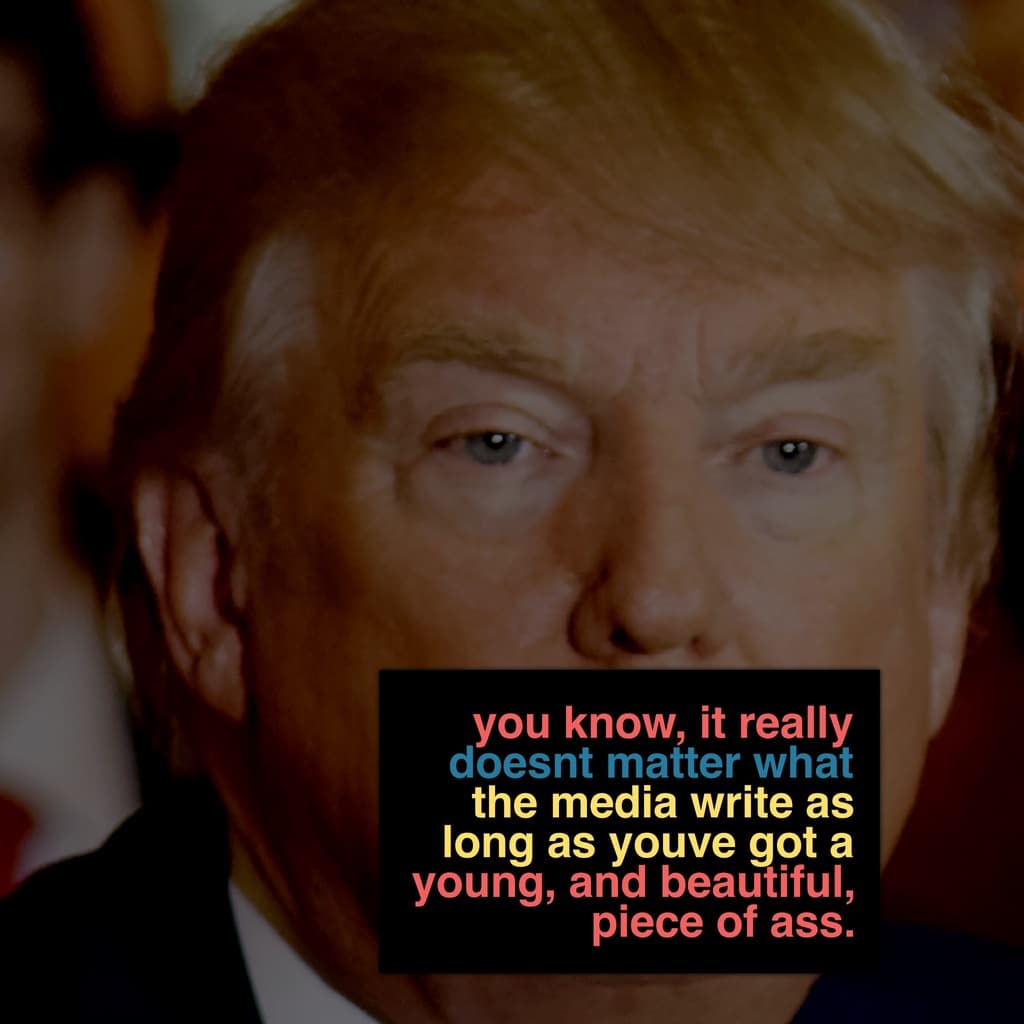 “You know who’s one of the great beauties of the world, according to everybody? And I helped create her. Ivanka. My daughter, Ivanka. She’s 6 feet tall, she’s got the best body. She made a lot money as a model—a tremendous amount.”– Donald Trump (The Howard Stern Show, 2003)

I’ve known Paris Hilton from the time she’s 12. Her parents are friends of mine, and, you know, the first time I saw her, she walked into the room and I said, ‘Who the hell is that?’ … Well, at 12, I wasn’t interested. I’ve never been into that. They’re sort of always stuck around that 25 category. – Donald Trump

“Who the fu** knows? I mean, really, who knows how much the Japs will pay for Manhattan property these days?” (TIME, January 1989) – Donald Trump

On the children of Syrian refugees:

“I can look in their faces and say, you can’t come here.” – Donald Trump 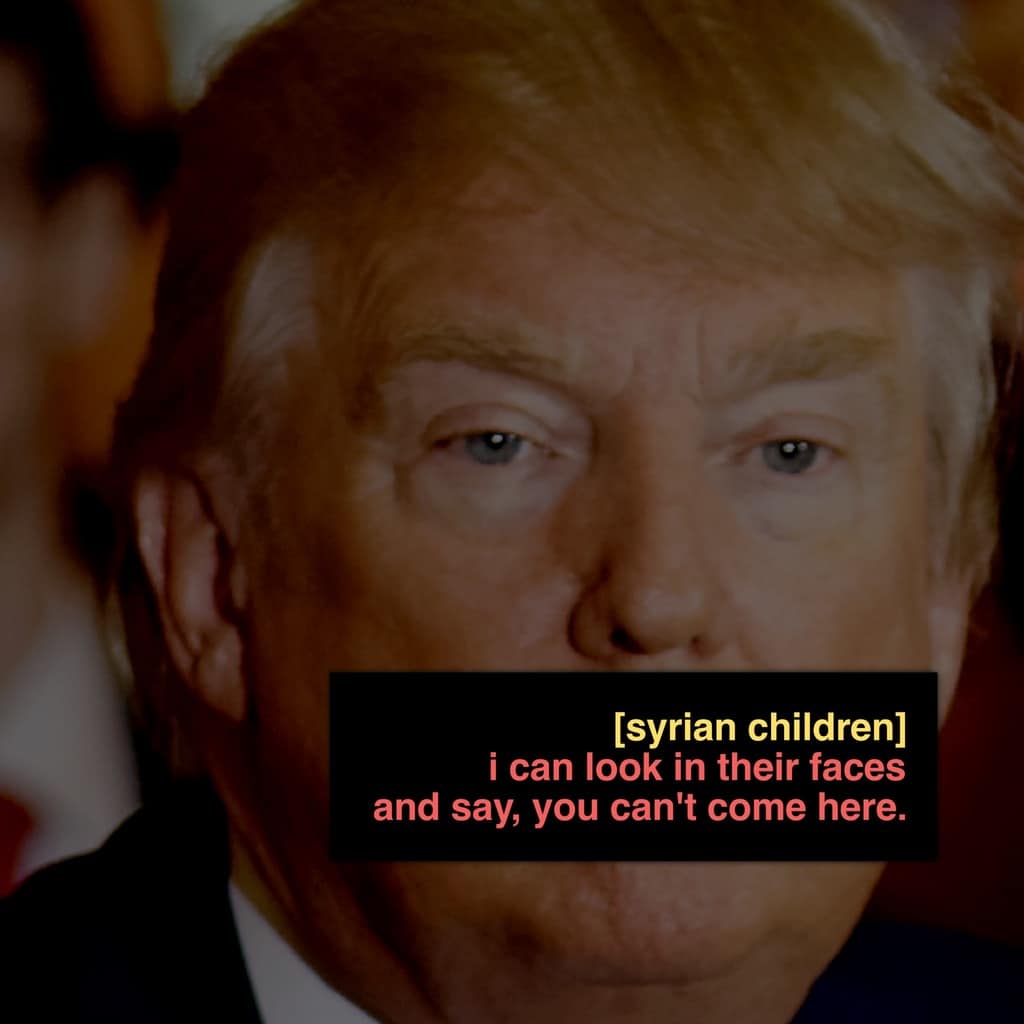 We don’t know where their parents come from, they have no documentation whatsoever” – Donald Trump

On Mexicans and Rape:

On the advantage of being black:

On African-Americans(allegedly said to a black accountant):

“Laziness is a trait in the blacks. … Black guys counting my money! I hate it.” – Donald Trump

“The only kind of people I want counting my money are little short guys that wear yarmulkes every day.” – Donald Trump

Our great African American President hasn’t exactly had a positive impact on the thugs who are so happily and openly destroying Baltimore! – Donald Trump

On the short fingers issue:

“My fingers are long and beautiful, as, it has been well been documented, are various other parts of my body.” – Donald Trump

“My twitter has become so powerful that I can actually make my enemies tell the truth.” – Donald Trump

“The point is: you can never be too greedy.” – Donald Trump

On his massive IQ:

“My IQ is one of the highest — and you all know it! Please don’t feel so stupid or insecure; it’s not your fault.” – Donald Trump

“I have so many fabulous friends who happen to be gay, but I am a traditionalist.” – Donald Trump

“I know politicians who love women who don’t even want to be known for that, because they might lose the gay vote, OK?”  – Donald Trump (Playboy, March 1990)

“It’s always good to do things nice and complicated so that nobody can figure it out.”– Donald Trump (New Yorker, May 19, 1997)

He definitely knows what he’s doing:

“If I get my name in the paper, if people pay attention, that’s what matters.”– Donald Trump (Donald Trump: Master Apprentice, 2005)

“I play to people’s fantasies. People may not always think big themselves, but they can still get very excited by those who do. That’s why a little hyperbole never hurts. People want to believe that something is the biggest and the greatest and the most spectacular.”– Donald Trump (The Art of the Deal, 1987)

On how hard his job is:

“Look at these contracts. I get these to sign every day. I’ve signed hundreds of these. Here’s a contract for $2.2 million. It’s a building that isn’t even opened yet. It’s eighty-three percent sold, and nobody even knows it’s there. For each contract, I need to sign twenty-two times, and if you think that’s easy … You know, all the buyers want my signature. I had someone else who works for me signing, and at the closings the buyers got angry. I told myself, ‘You know, these people are paying a million eight, a million seven, two million nine, four million one—for those kinds of numbers, I’ll sign the fucking contract.’ I understand. Fuck it. It’s just more work.”– Donald Trump (New Yorker, May 19, 1997)

“If you can’t get rich dealing with politicians, there’s something wrong with you.” – Donald Trump

On Jon Mccain and War Veterans:

“He’s not a war hero. He’s a war hero because he was captured. I like people that weren’t captured, OK, I hate to tell you.” – Donald Trump

Why we need climate change:

On the climate change conspiracy:

“The concept of global warming was created by and for the Chinese in order to make U.S. manufacturing non-competitive.” – Donald Trump

On trade with china:

“I would hate to think that people blame me for the problems of the world. Yet people come to me and say, ‘Why do you allow homelessness in the cities?’ as if I control the situation. I am not somebody seeking office.”– Donald Trump (Playboy, March 1990)

“It’s very possible that I could be the first presidential candidate to run and make money on it.”– Donald Trump (Fortune, April 3, 2000)

“I don’t want to be President. I’m 100 percent sure. I’d change my mind only if I saw this country continue to go down the tubes.”– Donald Trump (Playboy, March 1990)

So, what did you think of our favorite Donald Trump quotes so far. We’re thinking the next year will probably provide ample material to update this article with.

all gifs courtesy of giphy