In his prime, Diego Maradona was one of the most prolific and thrilling Striker’s in World Football. Many consider him to be one of the best of all time. Pele being the other top choice in the highly contentious debate.

However, he was known for many things besides his incredible talent, one of which, was his  poor decision making.  Unclaimed children with various women, a very serious drug habit, and of course his many moods; arrogant, rude, funny, bitter and incredibly petty. To say he was unafraid of speaking his mind is a massive understatement. And one of his favorite targets was his bitter rival Pele.

In fact, Maradona’s pettiness hasn’t softened in his old age. As recently has last month, during a celebration of both players, Maradona couldn’t resist taking yet another cheap shot.

When asked about being honoured with Pele he said:

“In 2000 I won the Player of the Century award thanks to the people. Pele was second. He also came second behind [Ayrton] Senna as Brazil’s greatest sportsman.

“The award that FIFA gave Pele isn’t worth s**t.”

Below, we’ve compiled some of the best Maradona quotes from the most outlandish to offensive, and everything in between. What better way to celebrate the birthday of such a polarizing athlete.

Diego Maradona Quotes: 12 Balls-y Lines That Will Surprise You

“My legitimate kids are Dalma and Giannina. The rest are a product of my money and mistakes.”

2) On Being A Great Sportsman:

“I was waiting for my teammates to embrace me and no one came, … I told them, ‘Come hug me or the referee isn’t going to allow it.'”

“We all know what the French are like and Platini as a Frenchman thinks he knows it all.”

“I was, I am and I always will be a drug addict. A person who gets involved in drugs has to fight it every day.” 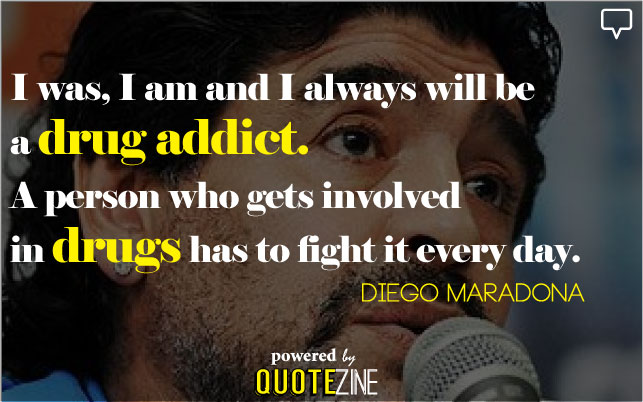 “When God decides its time, I guess he’ll come for us.”

“I believe in [Venezuelen President Hugo] Chávez, I am Chavista. Everything Fidel [Castro] does, everything Chávez does, for me is the best.”

8) On the infamous “Hand of God” goal that broke England’s heart: 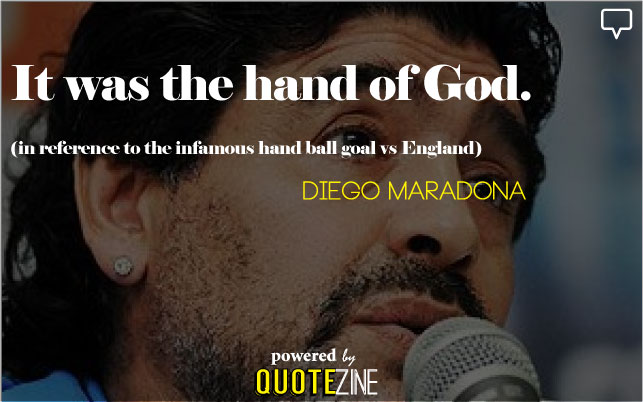 “I think Bush is a murderer. I’m going to head the march against him stepping foot on Argentine soil.”

Do you have any outlandish Maradona quotes we may have missed? Let us know in the comments.