As kids who were born in the early 80s, movies like Caddyshack, Ghost Busters, Ground Hog Day, and National Lampoon’s Vacation were a special part of our childhood. So we were especially saddened to hear the news of Harold Ramis’ death yesterday, Jan 24th 2014, at the age of 69.

As you may know, Harold Allen Ramis was an American writer, director, and actor who specialized in comedy. And he inspired many young comedians and comedy writers to write offbeat heroes in quirky new ways. He will surely be missed, and we send our sincerest condolences to his friends and family.

Below we have compiled a few of our favourite and most memorable quotes of his, and of his most iconic film characters. Even in writing this he continues to make us smile. We hope you enjoy.

“No matter what I have to say, I’m trying to say it in comedic form.”

Our Thoughts: As co-writer on both Ghostbusters films and others of our favourites, we agree that he did this quite well. Seeing the humor in things makes life fun.

“First and foremost, you have to make the movie for yourself. And that’s not to say, to hell with everyone else, but what else have you got to go on but your own taste and judgment?”

Our thoughts: Trust yourself when you’re creating. If you’re passionate about something, you probably know it pretty well and can trust your judgement.

3) On The Passion In His Projects:

“I feel a big obligation to the audience, almost in a moral sense, to say something useful. If I’m going to spend a year of my life on these things, I want something that I feel that strongly about.”

Our thoughts: An idea will come off better if it’s something you’re passionate about and can stand behind. 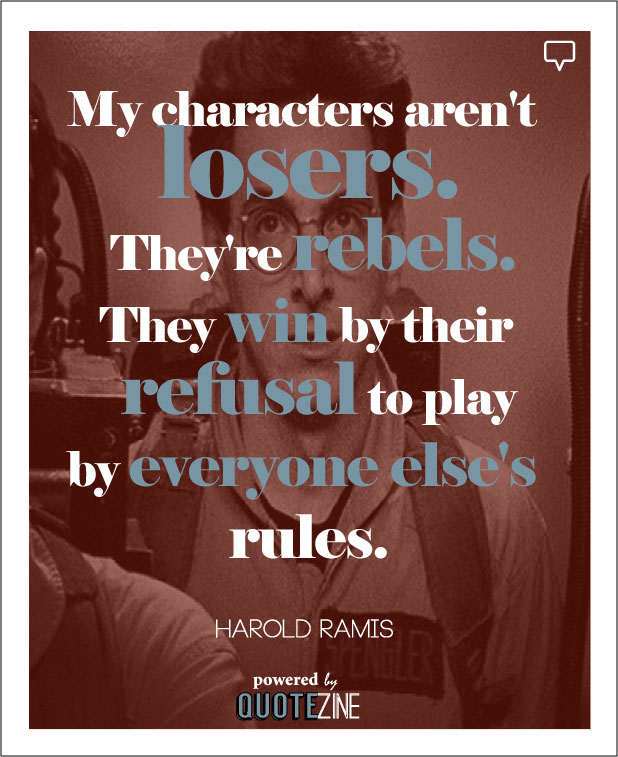 “Nothing reinforces a professional relationship more than enjoying success with someone.”

Our thoughts: Don’t be a d**che at work. If a project you worked on is getting praised, share it with the people that helped you. They’ll remember that next time.

“How one handles success or failure is determined by their early childhood.”

Our thoughts: Parents take note. A grown man who pouts or has a temper tantrum when he looses is not sexy. No one likes a gloat either.

6) On The Benefits of A Shrink:

“A psychologist said to me, there are only two important questions you have to ask yourself. What do you really feel? And, what do you really want? If you can answer those two, you probably can leave your neuroses behind you.”

Our thoughts: Well, I still don’t have an answer to those questions. Do you?

“My characters aren’t losers. They’re rebels. They win by their refusal to play by everyone else’s rules.”

Our thoughts: Don’t play by anyone else’s rules. Well except maybe the law’s.

And on that note, here are some of our favourite lines from his characters in movies: 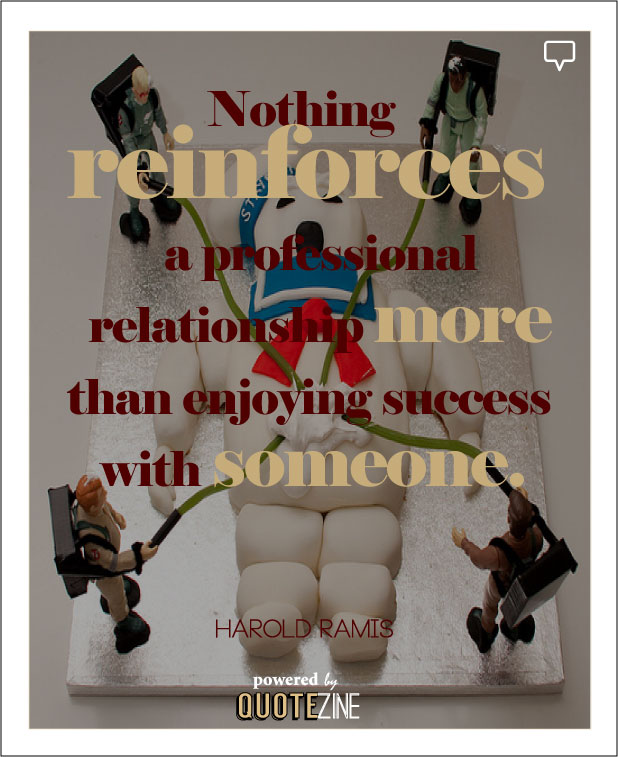 “Nah, we’re not homosexual. But we are willing to learn.” – Russell Ziskey

Our thoughts: Hilarious. One of our favs.

“We had part of a Slinky, but I straightened it.” – Dr Egon Spengler

Our thoughts: What walks down stairs, or alone in pairs, and makes a slinkity sound? I can’t believe I still remember that jingle.

“Well, let’s say this Twinkie represents the normal amount of psychokinetic energy in the New York area. Based on this morning’s sample, it would be a Twinkie… thirty-five feet long, weighing approximately six hundred pounds.” – Dr Egon Spengler

Our thoughts: Classic. Will never forget this scene. And now I feel like a Twinkie…

And who could forget:

RIP Mr. Ramis. Thank you for bringing laughter to millions.

Images via:  Casey Florig, poppet with a camera,

Do you have any memorable Harold Ramis Lines we may have missed? Let us know in the comments.