Ellen Degeneres will be back hosting the 2014 Academy Awards tonight and we are especially looking forward to her opening monologue. We’re pretty pumped about her selection, as Ellen’s laid back  delivery and penchant for teasing without offending is what separates her from some of her contemporaries. She’s a crowd favorite with a knack for being likable and will amuse with her creativity rather than relying on low blows.  She was once famously quoted  as saying:

“Most comedy is based on getting a laugh at somebody else’s expense. And I find that that’s just a form of bullying in a major way. So I want to be an example that you can be funny and be kind, and make people laugh without hurting somebody else’s feelings.”

Picking on celebrities is fun and all but when it’s borderline bullying it’s just boring. Historically though, the Oscars play it safe. So we’re expecting a ton of humor with some tasteful, nicely placed jabs.

In 2007, she had a few zingers that were just potent enough like:

“Jennifer Hudson is here from American Idol. America didn’t vote for you and yet you’re here with an Oscar Nomination. And Al Gore, America did vote for you.”

Showing she was nimble enough to throw a jab at both American Idol, and the U.S re-election of George W. Bush Jr., at the very same time.

She even poked fun at herself saying:

“Since the Oscars have decided to go green,  I’ve been told to recycle some of my old jokes.”

So with that in mind, we’ve put together some of the most funny, hilarious, and inspirational Ellen Degeneres quotes we could find to whet your appetite’s for this evening’s Oscar feast.

Ellen Degeneres Quotes: 10 Reasons She Will Rule The Oscars

1) She knows what’s important in life:

“But seriously, I think overall in the scheme of things winning an Emmy is not important. Let’s get our priorities straight. I think we all know what’s really important in life – winning an Oscar.” 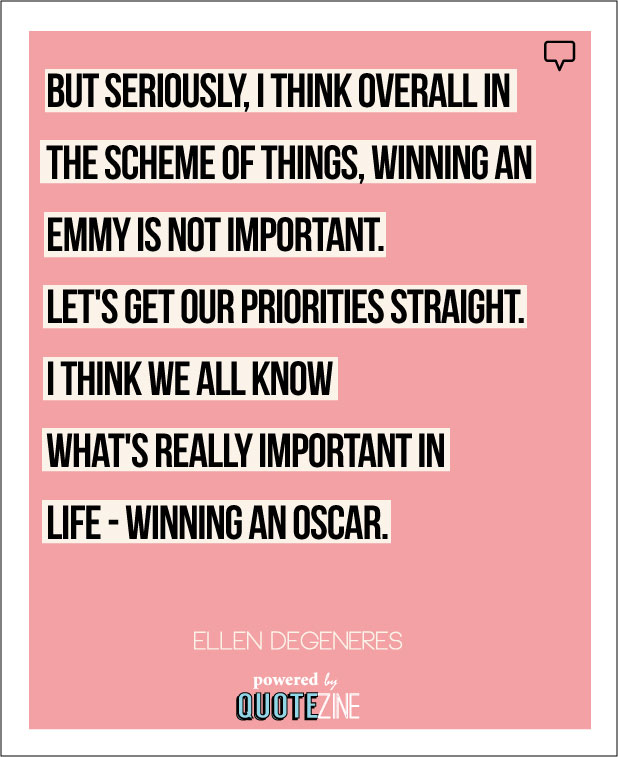 2) She shares our feelings on exercise:

“My grandmother started walking five miles a day when she was sixty. Shes ninety-seven now, and we don’t know where the hell she is.”

“I don’t need a baby growing inside me for nine months. If I’m going to feel nauseous and achy when I wake up, I want to achieve that state the old-fashioned way: getting good and drunk the night before.”

“You should never assume. You know what happens when you assume. You make an ass out of you and me because that’s how it’s spelled.”

5) She’s great at being introspective:

“Most people dream of wining an Academy Award. I had a dream of actually hosting the Academy Awards. So let that be a lesson to you kids out there: Aim lower.” 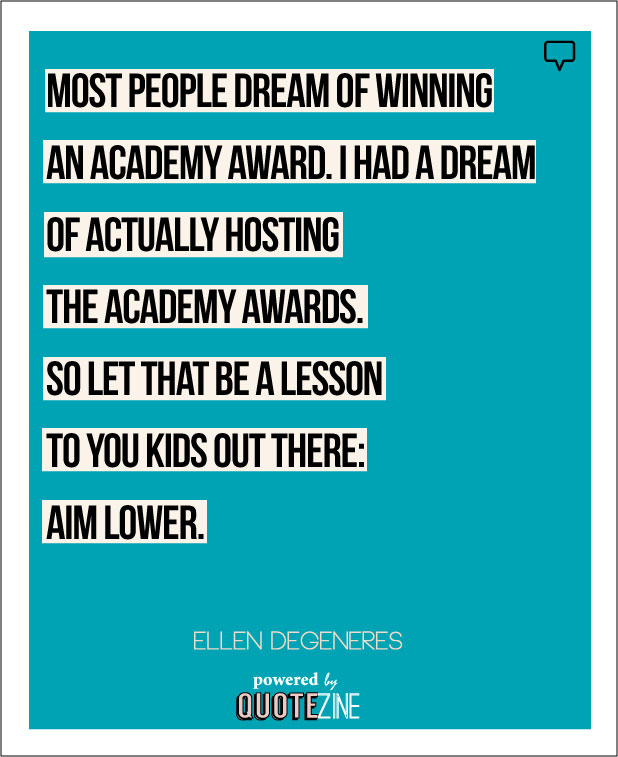 6) She’s does her homework:

“She’s a 4-year-old girl and just filled with joy and hope and not worried about competition. She’s just happy to be here. And that’s how it is really for your first nomination, but after you’ve been nominated a few times, you just want to win, really. Am I right, [eight-time nominee] Peter O’Toole?” – In reference to the Little Miss Sunshine Nomination in 2007

“I gotta work out. I keep saying it all the time. I keep saying I gotta start working out. Its been about two months since I’ve worked out. And I just don’t have the time. Which uh..is odd. Because I have the time to go out to dinner. And uh..and watch TV. And get a bone density test. And uh.. try to figure out what my phone number spells in words.”

8) She understands the meaning of friendship:

“Its turned into a mini peoples choice awards. Hasn’t it? And you find out right away who wins or loses.: You’re having a pleasant conversation with what you think is a good friend. You hear the click. They tell you to hold on. You’re confident they’re going to come back to you. And then they come back and they say, I’ve got to take this other call. And you know what that means what they just said to the other person? Let me get rid of this other call.”

9) She knows what the ladies want:

“And then Leonardo DiCaprio is here. Hi Leo. How you doing? I don’t have a joke, I just thought the ladies wanted to look at him for a second.”

10) She wants you to be yourself, unless you’re absolutely crazy.

“Accept who you are. Unless you’re a serial killer.”

If you have any more funny Ellen Degeneres quotes we may have missed, add them to the comments!