G.K. Chesterton, an English writer who, amongst his many legacies, is credited with writing the biography that revived the work of Charles Dickens. Many famous minds including C.S. Lewis, Marshall McLuhan and writer Neil Gaiman have touted G.K. Chesterton’s work as inspirational. We describe him as being one of the authors of the greatest love quote ever

“The way to love anything is to realize that it might be lost.” – G.K Chesterton

Chesterton was born in 1874 and passed away from congestive heart failure in 1936. Chesterton’s work can be described as poignant, sharp and brief; his quotes manage to provoke thought without relying on lengthy passages.

When it comes to memorable words of wisdom, brevity is an excellent quality to have in a writer. G.K. Chesterton does it again here with the quote,

What more can we say: the guy has some incredibly inspiring work that you have to check out. So with that in mind, here are 30 quotes that are sure to inspire you.

There are two ways to get enough. One is to continue to accumulate more and more. The other is to desire less.

The riddles of God are more satisfying than the solutions of man. – Introduction to The Book of Job.

Just going to church doesn’t make you a Christian any more than standing in your garage makes you a car.

Poets do not go mad; but chess-players do. Mathematicians go mad, and cashiers; but creative artists very seldom. I am not, as will be seen, in any sense attacking logic: I only say that this danger does lie in logic, not in imagination. – Orthodoxy

Education is simply the soul of a society as it passes from one generation to another.

When it comes to life the critical thing is whether you take things for granted or take them with gratitude.

Impartiality is a pompous name for indifference which is an elegant name for ignorance.

Let a man walk ten miles steadily on a hot summer’s day along a dusty English road, and he will soon discover why beer was invented. 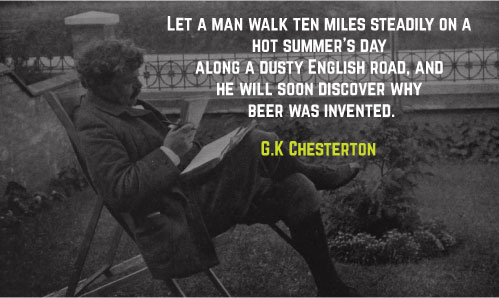 “I owe my success to having listened respectfully to the very best advice, and then going away and doing the exact opposite.”

An inconvenience is an adventure wrongly considered.

A woman uses her intelligence to find reasons to support her intuition.

Art consists of limitation. The most beautiful part of every picture is the frame.

Courage is almost a contradiction in terms. It means a strong desire to live taking the form of readiness to die.

Certain new theologians dispute original sin, which is the only part of Christian theology which can really be proved. – Orthodoxy

Theology is only thought applied to religion. – The New Jerusalem 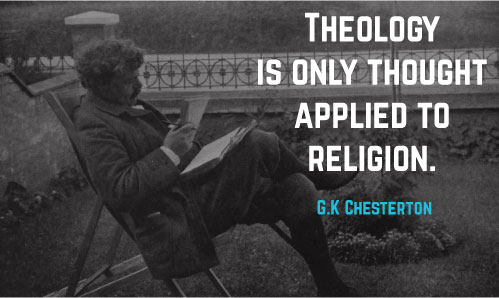 One of the chief uses of religion is that it makes us remember our coming from darkness, the simple fact that we are created. – The Boston Sunday Post

The word “good” has many meanings. For example, if a man were to shoot his grandmother at a range of five hundred yards, I should call him a good shot, but not necessarily a good man.

Fallacies do not cease to be fallacies because they become fashions.

To have a right to do a thing is not at all the same as to be right in doing it.

It is the test of a good religion whether you can joke about it. – All Things Considered

The simplification of anything is always sensational.

Pretty amazing stuff, no? For one of the lesser known quote authors, G.K. Chesterton is definitely one of the most prolific.

Did you find these inspiring? Are there any we missed? Let us know in the comments.