[quote]Don’t compare yourself with anyone in this world…if you do so, you are insulting yourself.[/quote]

Bill Gates knows a little something about being successfull. As the co-founder of Microsoft, his net worth as of 2014, was 81 Billion dollars. And if you can believe it, that’s actually going up due to shrewd investments infrastructure, railways and franchises.

Not bad for a guy who didn’t even finish college.

If you think that’s impressive, here are 5 little known facts that may surprise you:

–  Although Gates dropped out of college at Harvard, he still scored an extremely impressive 1590 out of 1600 on his SAT. At the time, this was equivalent to an IQ score of 170, so it’s safe to say he would have been extremely successful, had  he graduated.

– While attending Lakeside high school at 13 years old, Gates began his career as a progammer. He would later go on to sell his first piece of software – a time tabling system – at 17.

– Gates started Microsoft with Paul Allen from his garage in Albuquerque, New Mexico.  1977. By 1980, Microsoft was in business with IBM providing the MS-DOS operating system for all of IBM’s PC’s.

–  Gates is so wealthy that if he were to drop a $1000 bill on the ground, he would have earned it back in the four seconds it takes to pick up. If he were a country, he’d be the 37th richest on Earth.

–  He once told a university professor that he would be a millionaire by the age of 30. By 31, he had already become a billionaire.

These are only a fraction of the achievements he attained in the early part of his career.

Today, at 58, Gates continues to focus on his charitable efforts with the Bill & Melinda Gates Foundation. He stepped down as Microsoft CEO in 2000. In 2009, he pledged to donate the bulk of his fortune to charity before his death.

As a startup ourselves, we’re always on the hunt for inspirational quotes about success in business. The following collection pays tribute to Bill and his gift for inspiring others with his success and good will. This collection consists of the best quotes we could find

1. “The world won’t care about your self-esteem. The world will expect you to accomplish something BEFORE you feel good about yourself.”

Our thought: Don’t let your insecurities stop you from greatness. 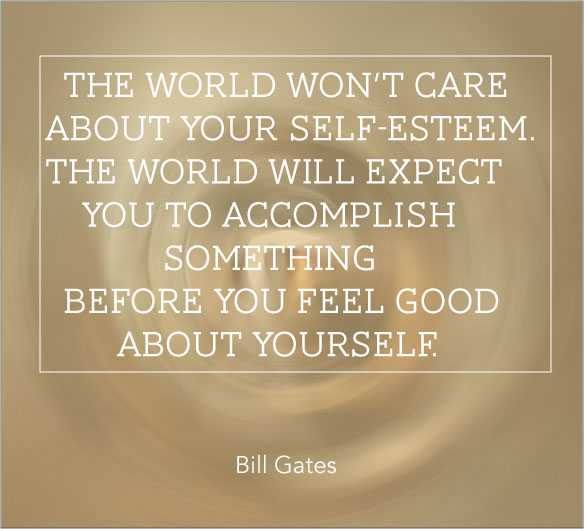 2. “If you give people tools, and they use their natural abilities and their curiosity, they will develop things in ways that will surprise you very much beyond what you might have expected.”

Our thought: Everyone has a different set of talents. Those differences can lead to innovative ideas and creations.

3. “Before you were born, your parents weren’t as boring as they are now. They got that way from paying your bills, cleaning your clothes and listening to you talk about how cool you thought you were. So before you save the rain forest from the parasites of your parent’s generation, try delousing the closet in your own room.”

Our thought: Before you judge others, take a look introspectively. Also, always be kind to those who helped you along the way.

4. “Don’t compare yourself with anyone in this world…if you do so, you are insulting yourself.”

Our thought: Comparing yourself usually only strengthens your insecurities.

5. “Success is a lousy teacher. It seduces smart people into thinking they can’t lose.”

Our thought: Those situations where we fail are our biggest teaching moments. 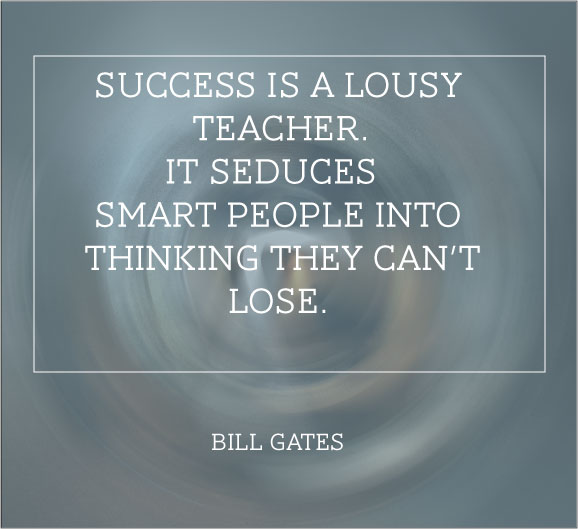 More: Motivational Quotes – 46 Sayings That Will Help You Conquer Everything

Our thought: We like to think of it as being more efficient….we’re not admitting to laziness.

7. “As we look ahead into the next century, leaders will be those who empower others.”

Our thought: Our best bosses were always those who worked the hardest and motivated us to do more. We’re sure it didn’t hurt productivity either.

8. “It’s fine to celebrate success, but it is more important to heed the lessons of failure.”

Our thought: Don’t be blinded by success, always learn from your mistakes.

9. “Your most unhappy customers are your greatest source of learning.”

Our thought: As annoying as they can  be, people who criticize sometimes have a point.

Our thought: We like this one. It’s our time now! 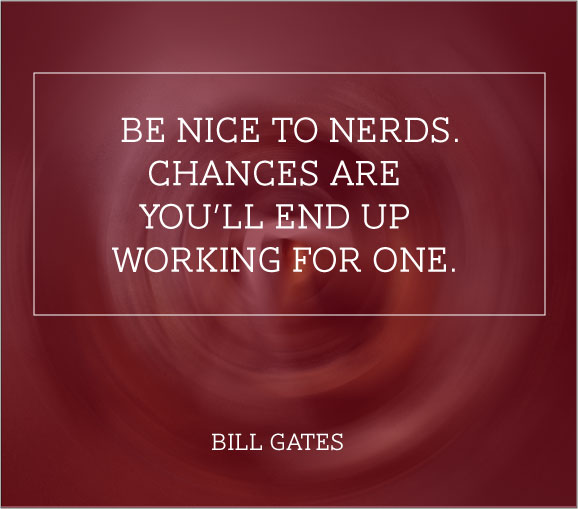 Our thought: A pretty package can go a long way.

12. “If you think your teacher is tough, wait till you get a boss.”

Our thought: We always had nice bosses. But we have heard stories….

13. “I think it’s fair to say that personal computers have become the most empowering tool we’ve ever created. They’re tools of communication, they’re tools of creativity, and they can be shaped by their user.”

Our thought: It is pretty crazy to think how much we use them, and can’t live without them now. We remember our firsts… don’t tell Mr. Gates they were Apple computers.

On Looking Out For Number 1:

14. “Life is not divided into semesters. You don’t get summers off, and very few employers are interested in helping you. Find yourself.”

Our thought: Knowing who you are, and what motivates you can help you succeed in whatever career or task you set your mind to.

Our thought: Time flies. Use it wisely. 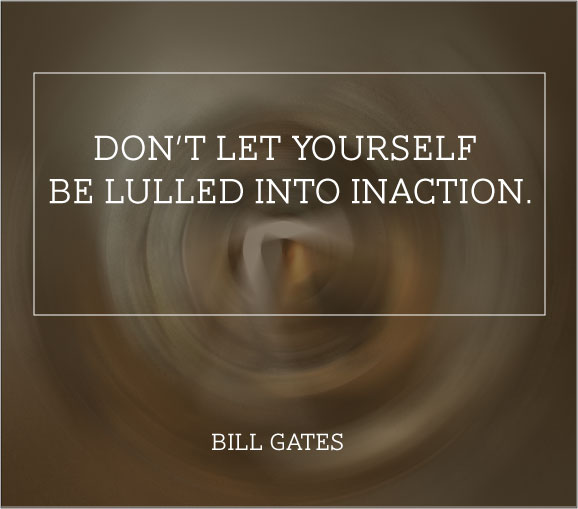 16. “I really had a lot of dreams when I was a kid and I think a great deal of that grew out of the fact that I had a chance to read a lot.”

Our thought: Reading grows imagination. Imagination leads to creativity, and well you can imagine the rest.

17. “Until we’re educating every kid in a fantastic way, until ever inner city is cleaned up, there is no shortage of things to do.”

Our thought: There is still a lot of good to be done in this world. Start volunteering and helping out.

18. “Is the rich world aware of how four billion of the six billion live? If we were aware, we would want to help out, we’d want to get involved.”

Our thought: We like to think this is true of all rich people. but unfortunately we’re not so sure. But ignorance can’t help, so promote awareness of whatever cause you’re passionate about.

Our thought: Well of course we will if someone shows us the solution.

20. “The Internet is becoming the town square for the global village of tomorrow.”

Our thought: We think the internet is more like the Colosseum  than the town square these days, but we understand what he means. 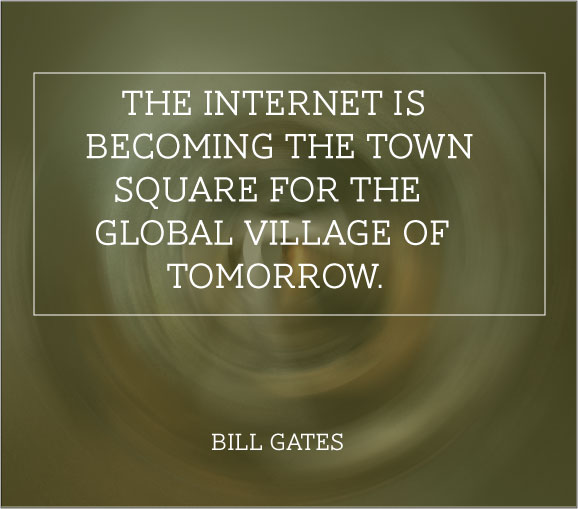 Do you have any other Bill Gates Quotes we may have missed? Let us know in the comments!