I’m selfish, impatient and a little insecure. I make mistakes, I am out of control and at times hard to handle. But if you can’t handle me at my worst, then you sure as hell don’t deserve me at my best.

Have you ever scrolled through Tumblr? Even once? Great, you are now likely an expert on Marilyn Monroe quotes. Mainly young girls (and others I’m sure) idolize the sex symbol for her insightful quips on relationships, success, and views on being a woman in general. So you may know her words, but how much do you know about her? Well, you’re about to find out.

Marilyn Monroe was born Norma Jeane Mortenson on June 1st 1926 in Los Angeles California. As her mother suffered from mental illness, Norma spent her younger years bouncing between homes. Her fascination with cinema and stardom would start while under the care of her mother’s friend Grace McKee, who would let Norma dress up as Jean Harlow. Her first brush with notoriety came after being photographed working in Radioplane Munitions Factory in an effort to boost wartime morale. You can only imagine what the photographer thought of young Norma, and she would be advised to model for The Blue Book Modelling agency.

So began her transformation into the icon we know today: she would dye her hair blonde and later change her name to Marilyn Monroe. (Well first to Carole Lind, then Norma Jeane Monroe in honour of her mother’s maiden name, then Norma Monroe, then Jeane Monroe…it was a process). Marilyn Monroe would garner as much attention in her death as she would during her life, famously dying of an overdose at the age of 36 (although some would dispute that). Living a complicated life in such a short time, Marilyn Monroe’s quotes have become a symbol of empowerment and introspection.

Many of her best sayings are often misquoted as coming from her, so it can be difficult at times to distinguish what she did and didn’t actually say. We worked hard to verify every quote, sourcing them when possible. However, there are also a few iconic sayings that we kept here because of their inspirational factor rather than being authentic quotes. So keep in mind that if we didn’t source it, it likely wasn’t said by Ms. Monroe. Nonetheless, we hope you enjoy the few that we’ve selected.

Marilyn Monroe Quotes: 20 Inspiring Sayings Every Girl Can Relate To

“Imperfection is beauty, madness is genius and it’s better to be absolutely ridiculous than absolutely boring.” – Marilyn Monroe

Our thoughts: After doing a bit of research, it’s hard to say whether Marilyn said these words. She was an absolute perfectionist, so it seems unlikely that she would have said “Imperfection is beauty”. She probably also never said “Madness is genius” as her mother suffered from mental illness throughout her childhood, and she was afraid of suffering the same fate. However, we think the quote is powerful so we kept it in here. What really makes us beautiful is our own uniqueness and imperfections.  Perfection isn’t all that exciting. 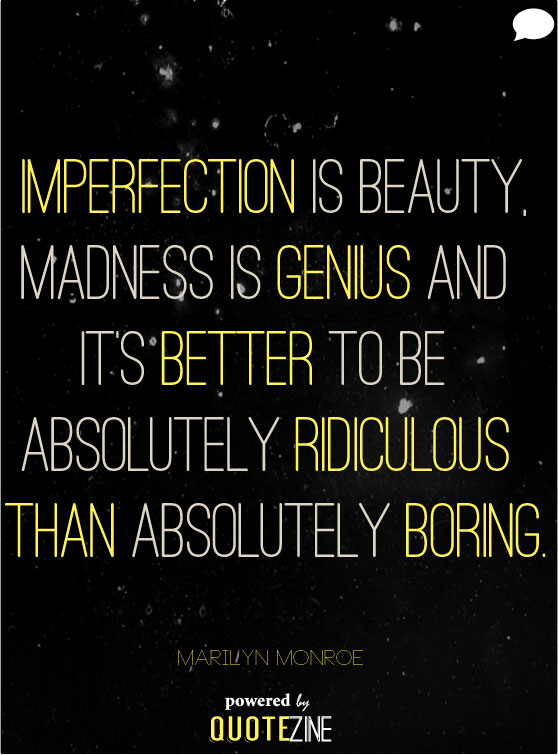 “I’m selfish, impatient, and a little insecure. I make mistakes, I’m out of control, and at times hard to handle. But if you can’t handle me at my worst, then you sure as hell don’t deserve me at my best.” – Marilyn Monroe

Our thoughts: No one’s perfect and has their faults. But if you can’t accept them, then you don’t deserve the best parts of that person. 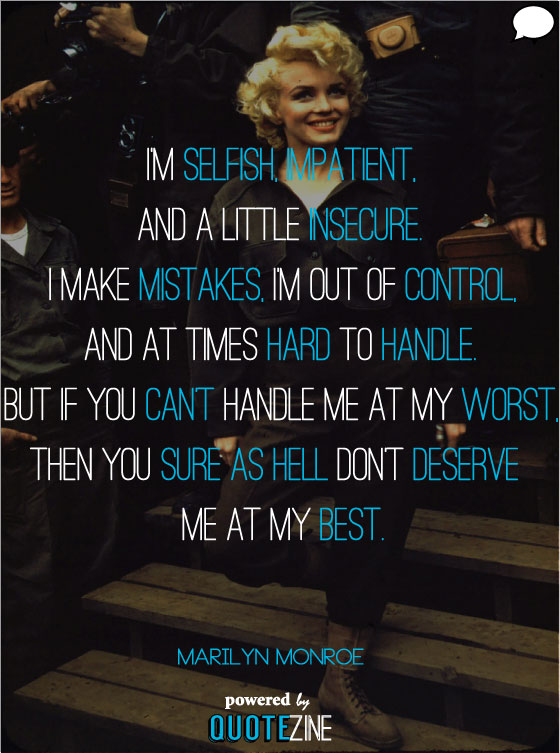 “Unfortunately, I am involved in a freedom ride protesting the loss of the minority rights belonging to the few remaining earthbound stars. All we demanded was our right to twinkle.” – Marilyn Monroe from Telegram

Our thoughts: This quote it turns out is often misquoted to “We are all stars and we deserve to twinkle.” We think the true quote, from a telegram in 1962 declining a party invitation from Mr. and Mrs. Robert Kennedy, is much more powerful.

“I restore myself when I’m alone. A career is born in public — talent in privacy.” – Marilyn Monroe from Ms. Magazine (August 1972)

Our thoughts: Always take some time for yourself to cultivate your art and talents. 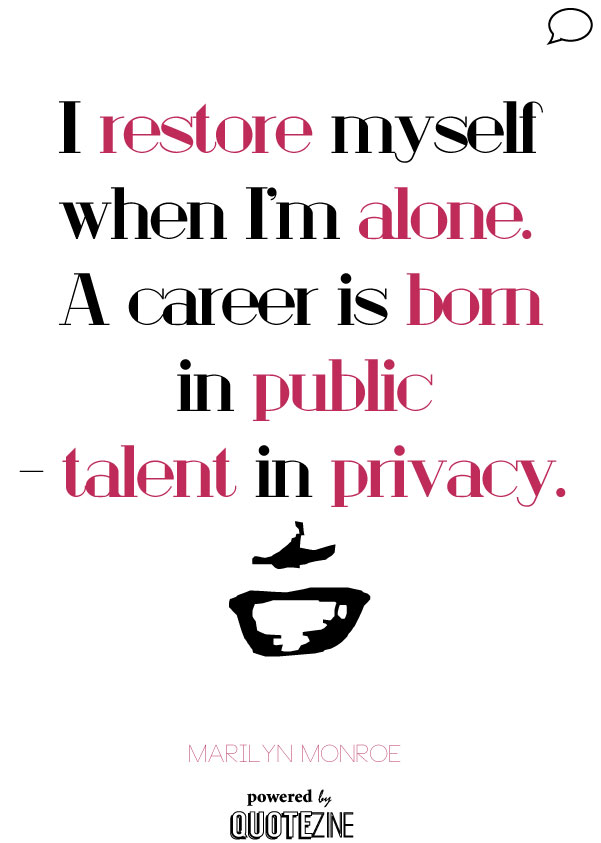 “How wrong is it for a woman to expect the man to build the world she wants, rather than to create it herself.” – Marilyn Monroe

Our thoughts: Women shouldn’t feel like they have to rely on a man for their own happiness, they are plenty capable of creating it for themselves. 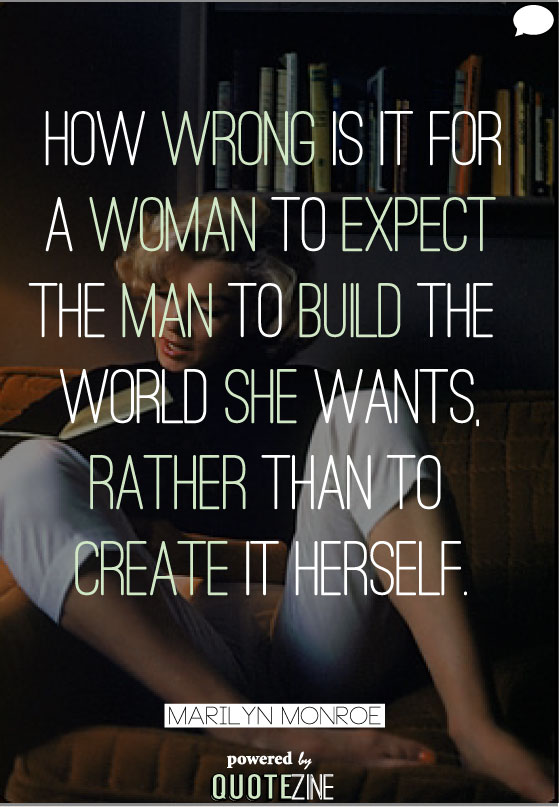 “It’s better to be unhappy alone than unhappy with someone – so far.” – Marilyn Monroe from On Being Blonde

Our thoughts: We’ve read this quote so many times, but had no idea that the quote ended with “so far”. Nevertheless, when we’re unhappy with someone we blame it on that person, rather than look introspectively at why we may be unhappy. 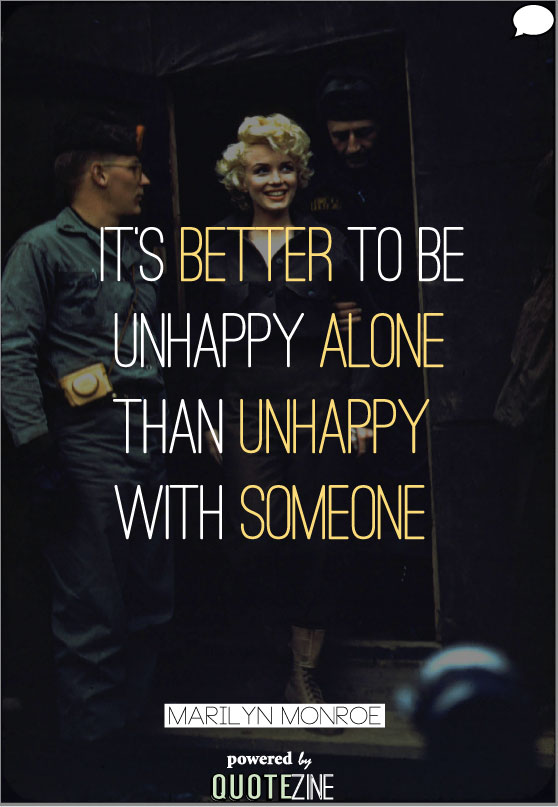 “That’s the trouble, a sex symbol becomes a thing. But if I’m going to be a symbol of something, I’d rather it be sex than some of the things we’ve got symbols of… I just hate to be a thing.”– Marilyn Monroe from Ms. Magazine (August 1972)

Our thoughts: This was a comment on her being a sex symbol and being idolized. She was still a person with talents and flaws just like the rest of us. She wanted to be seen as more than just a symbol.

“Dogs never bite me – just humans.”– Marilyn Monroe from A Beautiful Child in Music for Chameleons (1980) by Truman Capote

Our thoughts: To us this speaks of the unconditional love of pets. People on the other hand can sometimes betray and have selfish motivations. 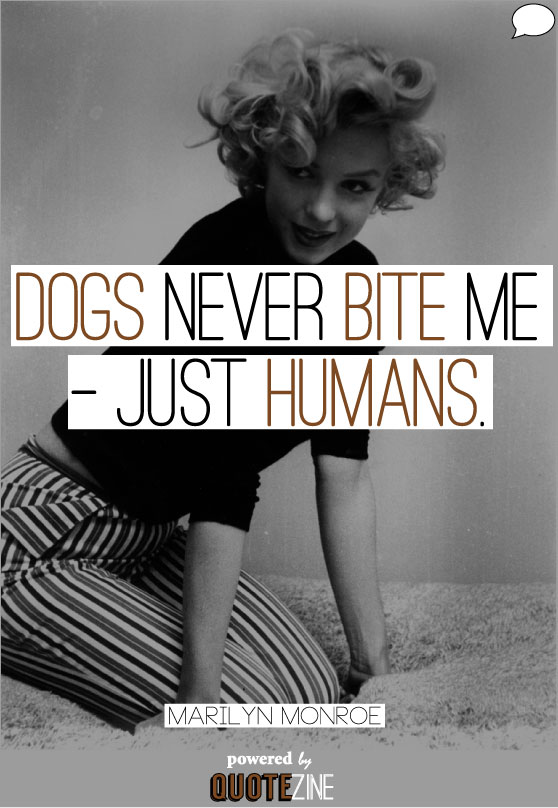 “I have feelings too. I am still human. All I want is to be loved, for myself and for my talent.” – Marilyn Monroe

Our thoughts: This is actually really sad, and perhaps speaks to her tumultuous love life (three marriages and alleged affairs with JFK and Robert Kennedy) and being treated as a sex symbol rather than a person. 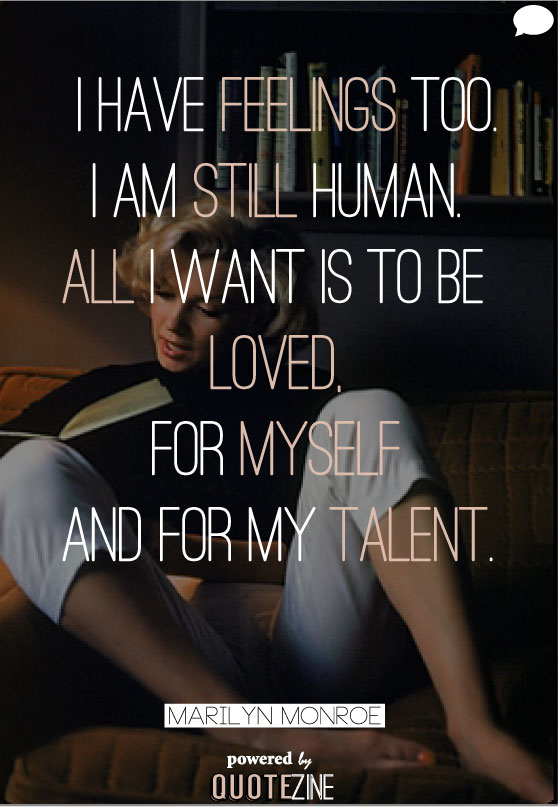 “A career is wonderful, but you can’t curl up with it on a cold night.” – Marilyn Monroe

Our thoughts: We’ve had many of our career oriented, ambitious friends think the same thing. A career is a great thing to motivate and inspire you, a great goal to obtain, but at the end of the day everyone wants to have someone to love and be loved by. We think we can have both. 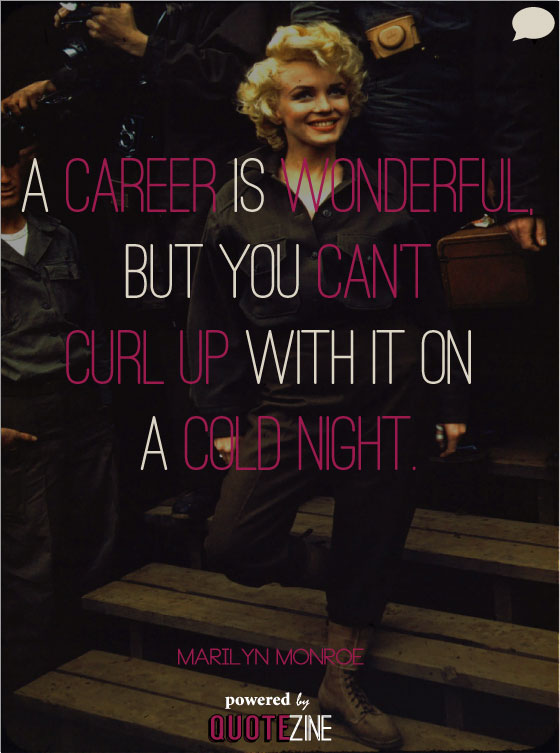 Our thoughts: We agree. It is natural. Why not go along with it?

“I used to think as I looked out on the Hollywood night, there must be thousands of girls sitting alone dreaming of being a movie star. But I’m not going to worry about them. I’m dreaming the hardest.”– Marilyn Monroe from My Story

Our thoughts: Don’t give up on your dreams no matter how difficult they may seem. If you work hard enough, it’ll happen. 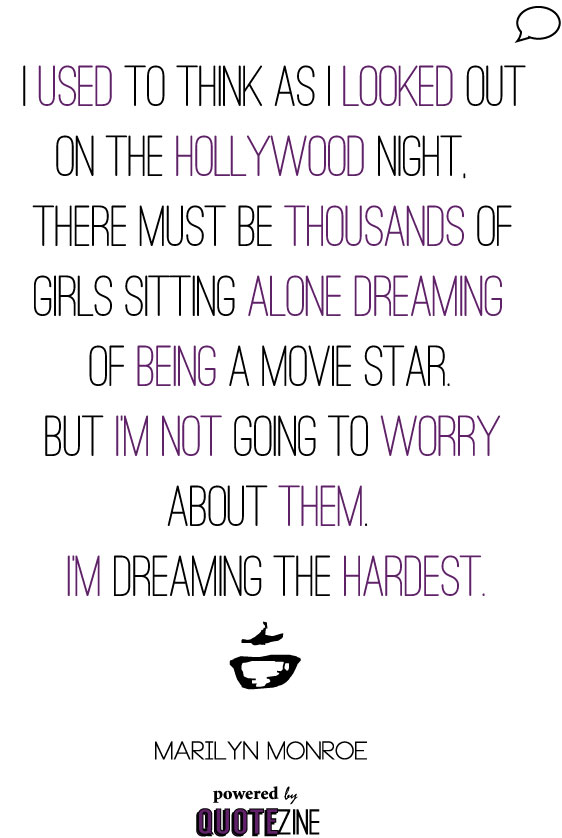 “I knew how third rate I was. I could actually feel my lack of talent, as if it were cheap clothes I was wearing inside. But, my God, how I wanted to learn, to change, to improve! I didn’t want anything else, not men, not money, not love, but the ability to act.”– Marilyn Monroe from My Story

Our thoughts: If you truly want something focus your energy towards it. Hard work and perseverance overcomes talent any day. 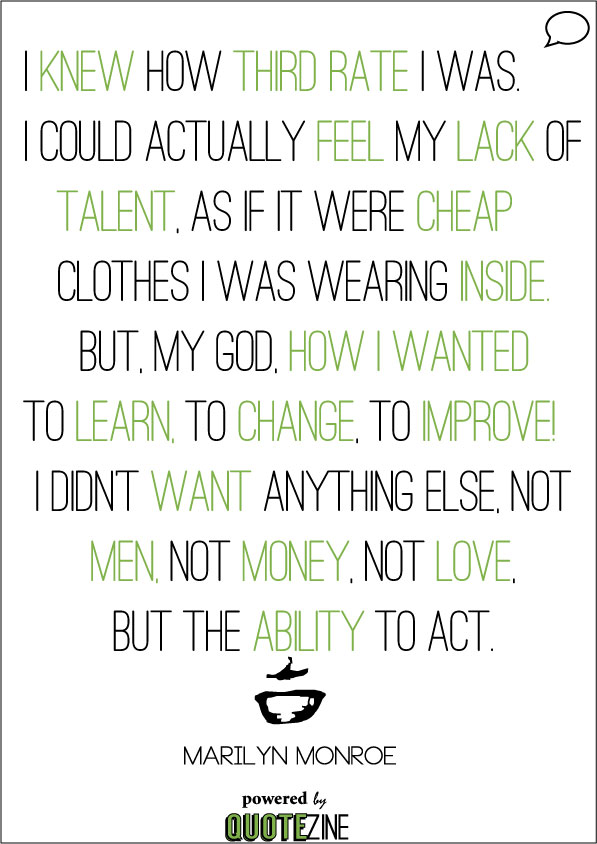 “The real lover is the man who can thrill you just by touching your head or smiling into your eyes – or just by staring into space.”– Marilyn Monroe from My Story

Our thoughts: Oh, this is good. Take note boys. 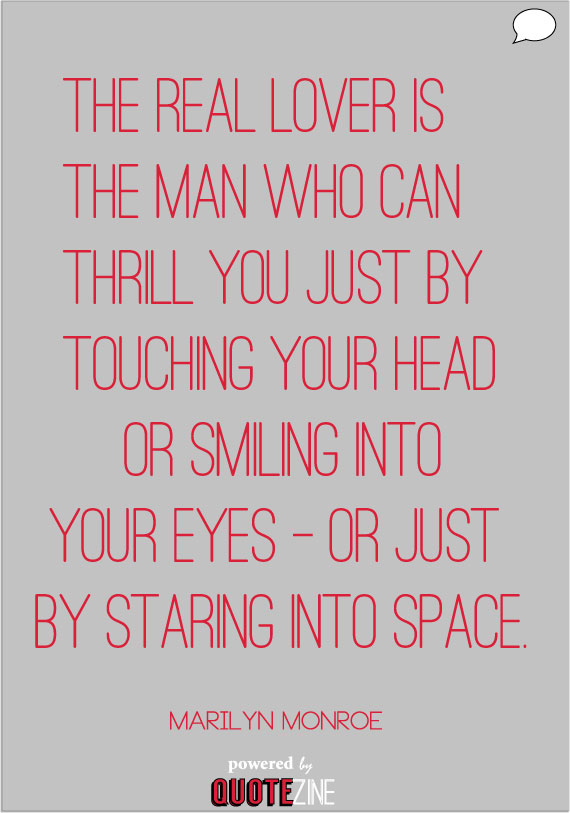 “The truth is I’ve never fooled anyone. I’ve let people fool themselves. They didn’t bother to find out who and what I was”– Marilyn Monroe from My Story

Our thoughts: In love we sometimes are easily blinded to the truth of the situation. 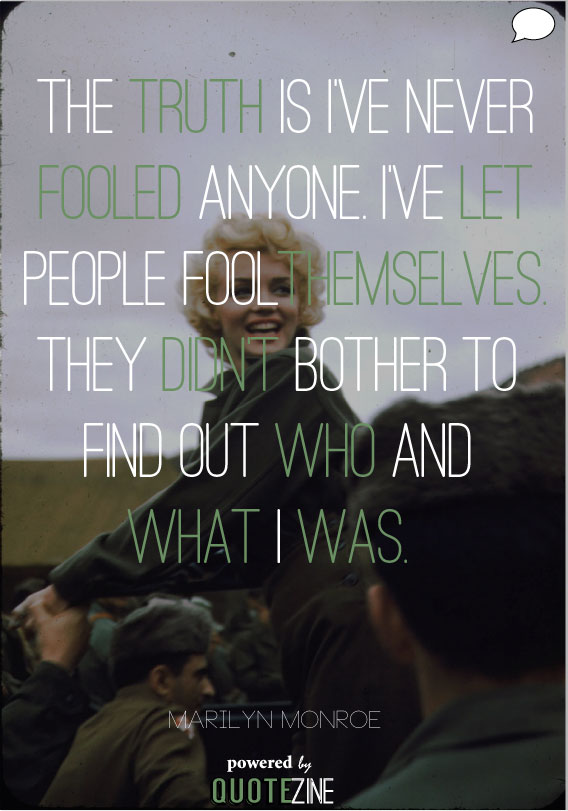 Our thoughts: Sexy, smooth, and comfortable. We’re sure the advertisers at Chanel loved this. 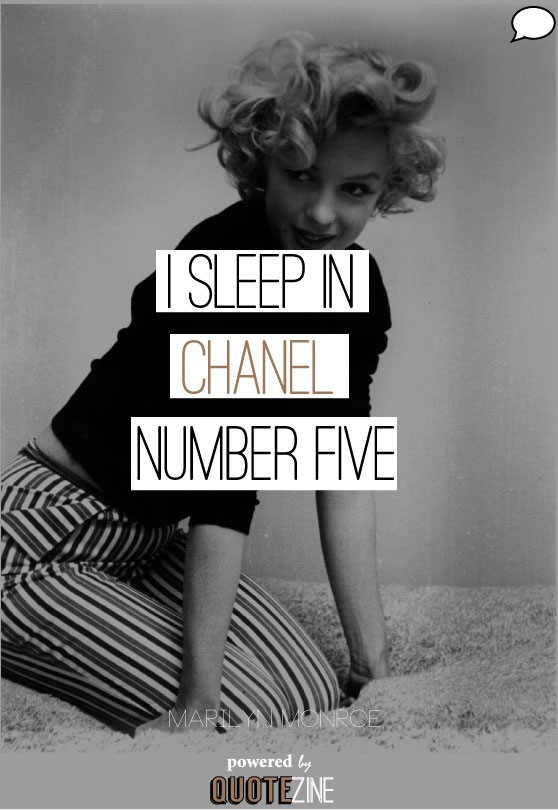 “I’ve been asked, ‘Do you mind living in a man’s world?’ I always answer, ‘Not as long as I can be a woman in it.’”– Marilyn Monroe – Will Acting Spoil Marilyn Monroe?

Our thoughts: Although it can be tough as a woman working in male dominated industries, sometimes we use it to our advantage. But don’t tell them that. 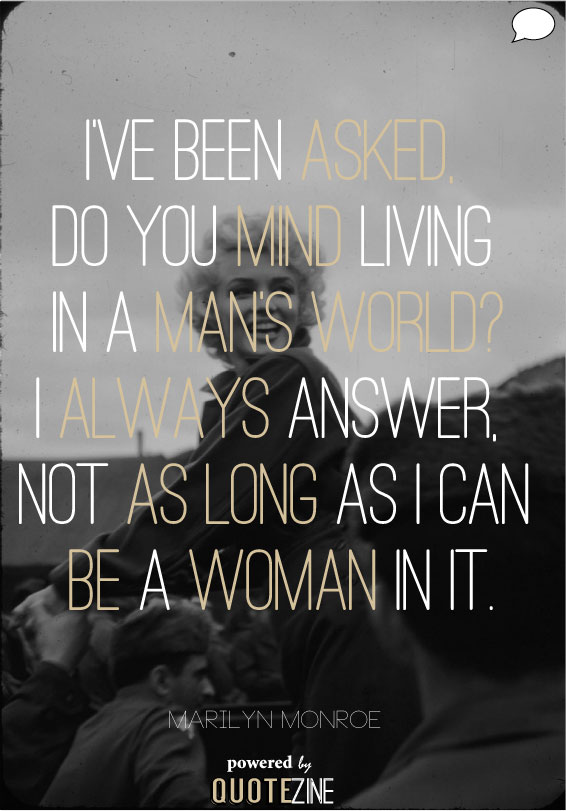 “Respect is one of life’s greatest treasures. I mean, what does it all add up to if you don’t have that? If there is only one thing in my life that I am proud of, it’s that I’ve never been a kept woman.”– Marilyn Monroe – from Marilyn, Her Life In Her Own Words

Our thoughts: Make something for yourself. Don’t rely on anyone else. That way you can look back and be proud of what you’ve accomplished. 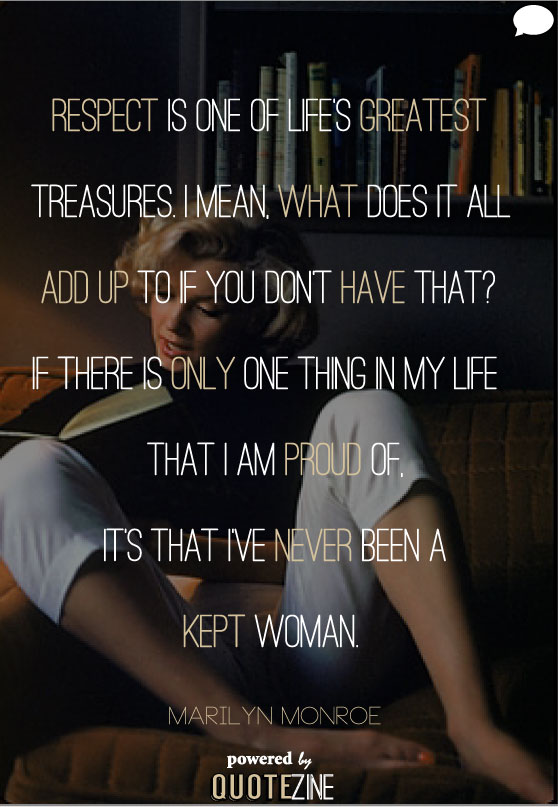 “Fame will go by and, so long, I’ve had you fame. If it goes by, I’ve always known it was fickle. So at least it’s something I experience, but it’s not where I live.”– Marilyn Monroe from Marilyn, Her Life In Her Own Words

Our thoughts: It’s good to keep yourself grounded. Everything is an experience, but fame or success shouldn’t be the only thing you should use to define yourself. 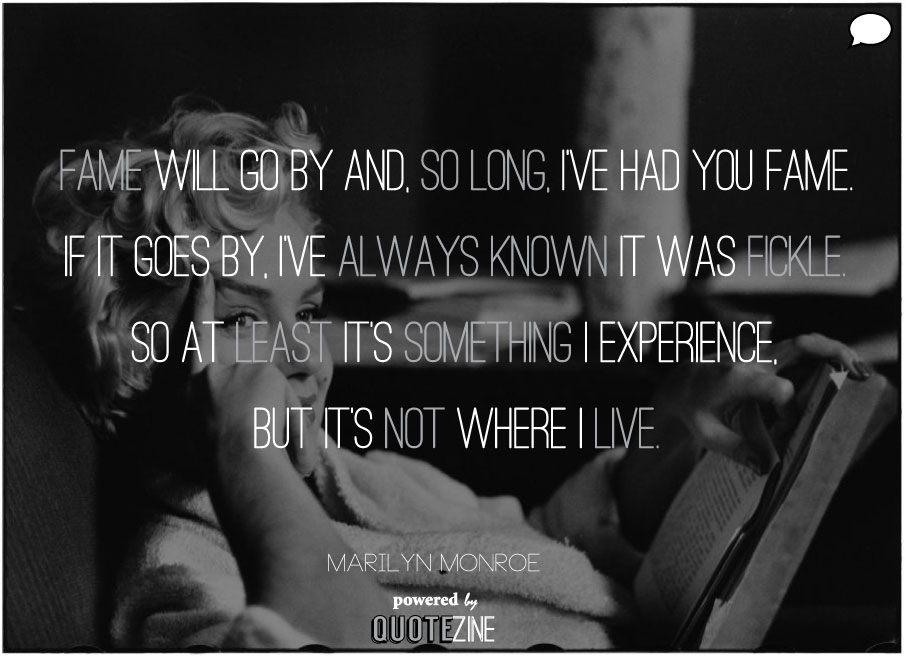 20. On Everyone Being Connected:

“What I really want to say: That what the world really needs is a real feeling of kinship… We are all brothers.”– Marilyn Monroe– from Marilyn, Her Life In Her Own Words

Our thoughts: Beautiful. In such an individualistic society we should never forget that we are ultimately all connected and similar. 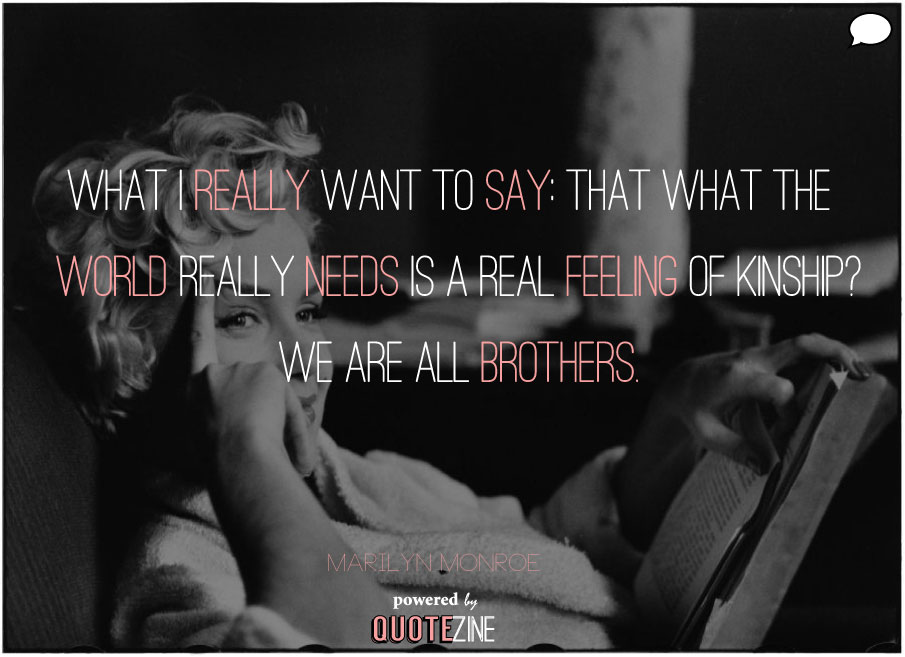 Do you have any favorite Marilyn Monroe quotations we may have missed? Let us know in the comments.