Frank Ocean, aside from being one of the most quotable musicians, has been one of our favorite artists of the last few years. Lately though, he’s been making headlines for what he’s said and done outside of the studio.

His feud with the restaurant chain Chipotle, and his public squabble with Chris Brown have kept him in the headlines what feel are the wrong reasons. The man is a legend in the making, and if you’ve made it this far and are still confused or you’ve been living under a rock, here’s a quick bio:

He was born Christopher Breaux on this date in 1987. He then changed his name to Christopher Francis William Ocean in 2010. His friends call him Lonny. Shortly after, he joined the break out rap group Odd Future, of which Tyler the Creator was a close friend. Around that time, the famed super producer Tricky Stewart also helped sign a deal with Def Jam.

Fast forward to 2011, his breakout mixtape,  Nostalgia, Ultra, hits the internet and all hell breaks loose. He draws comparisons to greats like Prince, and inevitably starts working with massive artists like Jay-Z, Beyonce and Kanye West. In 2012, he releases his first official album to massive critical and commercial success. He is also praised wildly for addressing rumours about his sexuality, writing an open letter about unrequited love to a man while in his teens. It ends powerfully with the quote:

“I don’t know what happens now, and that’s alrite. I don’t have any secrets I need kept anymore…I feel like a free man.”


This is obviously a huge statement given the continued prevalence of homophobia in urban and mainstream music. Ocean would go on to win a Grammy that same year.

Fast forward to the present and you have a household name with multiple grammy wins and .

Below we’ve scoured far and wide to collect the absolute best Frank Ocean quotes we could find. Everything from his twitter feed and magazine interview’s to the lyrics of his soon to be classic songs.

We hope they inspire you as much as his music has inspired us.

Frank Ocean Quotes: 20 Powerful Lyrics and Lines To Live By

“When you’re happy, you enjoy the music but when you’re sad, you understand the lyrics.”

Our thought: We’ve never thought about it that way before, but he makes a lot of sense. Maybe we’re more involved in our thoughts when we’re sad, and so concentrate on things we don’t think about when we’re happy. 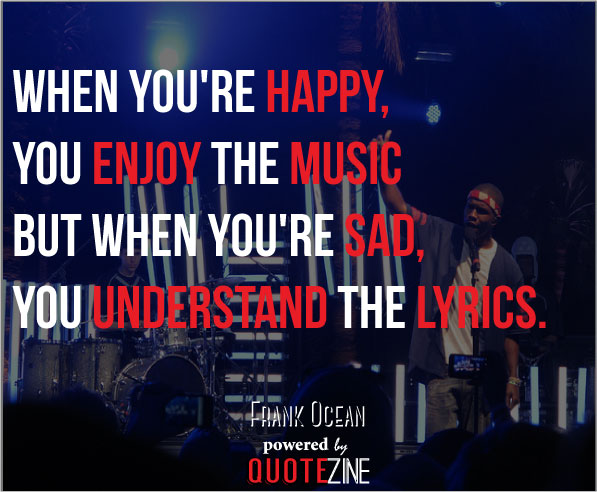 Our thought: I thought I wouldn’t have to do any more math problems after I finished undergrad.

3. “Yes, I could have easily changed the words. But for what? I just feel like it’s just another time now…. When you write a song like ‘Forrest Gump,’ the subject can’t be androgynous. It requires an unnecessary amount of effort. I don’t fear anybody at all.”

Our thought: We love how he pointedly chose not to make the pronouns in his love songs generic. It’s about time.

Our thought: Every encounter is a life lessons. Good or bad.

5.  “This unrequited love. To me it’s nothing but a one-man cult.” – from Bad Religion

Our thought: Love can feel like that. It’s easy to get lost in the other person, sometimes brainwashed. It’s not until you’re out of the relationship that you come up for air. 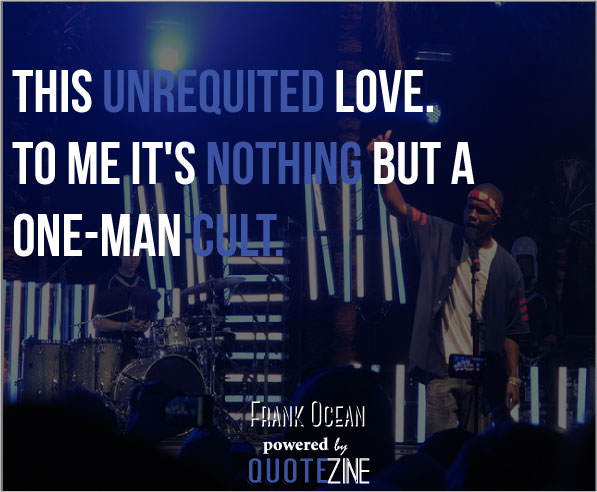 Our thought: Be with someone who knows what they have and is your biggest supporter. Not someone who is looking for something better.

Our thought: People never look at the context of someones words or actions. It can tell you a lot about why people do and say the things they do.

On The Remedy For A Broken Heart:

Our thought: Amazing. Ice cream makes everything better. Maybe minus the violence, as good as that might sound.

On The Key To Life:

9. “And the best advice I got was Keep Writing, and  Keep Living, and Keep Loving” – from Dust

Our thought: Perfection in simplicity right there.

On Coming out and Facing Fears:

Our thought: Try not to be afraid of being yourself. As hard as it may seem sometimes,  the people who truly care about you will love you no matter what. 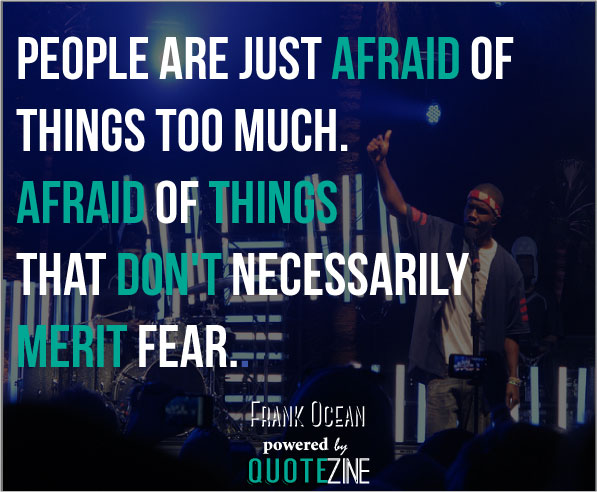 More: Lorde Quotes: The 17 Best Quotes And Lyrics So Far

Our thought: We love that he is so courageous and comfortable being himself. We can all learn from this.

On Helping the Next Generation:

12. “I suppose a percentage of that act was because of altruism. I was thinking of how I wished at 13 or 14 there was somebody I looked up to who would have said something like that, who would have been transparent in that way.”

Our thought: It is so important for our young people to have good role models to look up to. We’re happy that he is one of them.

On The Secret To Being Fulfilled:

13. “You just do what you can and you have as much fun as possible.”

Our thought: As much fun as possible is always good advice.

More: Short Quotes: 30 Sayings To Get You Motivated

Our thought: Shove those feelings deep down inside where no one can find them.

Our thought: It’s nice to get some recognition every once and a while. 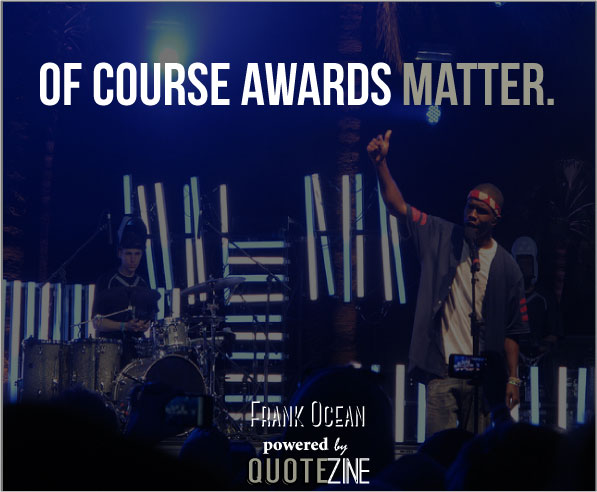 16. “We all know we have a finite period of time. I just feel if I’m going to be alive, I want to be challenged – to be as immortal as possible. The path to that isn’t an easy way, but it’s a rewarding way.”

Our thought: Never pass up a challenge. It’s tough but so rewarding once you’ve mastered it. Plus, it keeps boredom away.

On Playing Up Strengths:

17. “The idea of recognizing your strengths and using them in as versatile a way as you can is cool to me.”

Our thought: Everyone has strengths. It’s a matter of tailoring them to what you enjoy and want to do. That’s the fun (and ok, sometimes frustrating) part.

18. “In art, at a certain level, there is no ‘better than.’ It’s just about trying to operate for yourself on the most supreme level, artistically, that you can and hoping that people get it. Trusting that, just because of the way people are built and how interconnected we are, greatness will translate and symmetry will be recognized.”

Our thought: Deep man. Seriously. Be true to yourself and those that are meant to will get it.

19. “There’s just some magic in truth and honesty and openness.”

Our thought: It’s freeing really. And nice. Be honest and open with people and they’ll do the same. If not, punch them in the face and get some ice cream.

On his art outliving his depression:

Our thought:  There’s beauty in the immortality of art. We do hope his depressive symptoms have been alleviated. 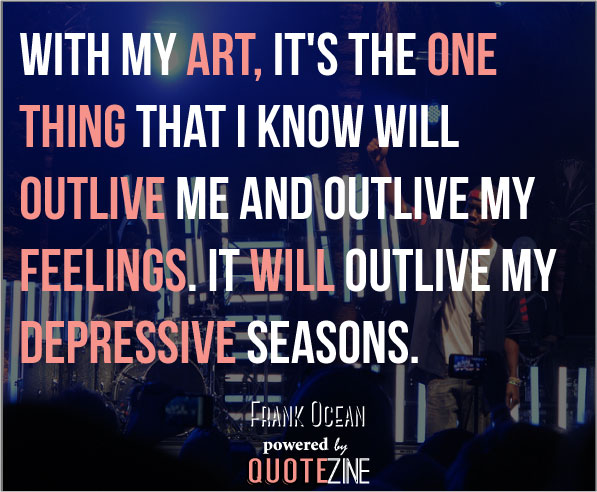 More: Lorde Quotes: The 17 Best Quotes And Lyrics So Far

Many of these quotes are from his interview in with The Guardian. You can check out the full interview here.


Have any powerful Frank Ocean lyrics or quotations we may have missed? Let us know in the comments!