What can we say about Cats that hasn’t already been said on Tumblr, I Can Has Cheezburger, Lolcats or any other site responsible for the cat craze these last few years? For one, how about a fascinating little known fact about cats?

Something interesting we came across when writing this post is that apparently, unlike dogs, cats treat us like they would other cats. Neat, right? Don’t believe us? check out this article from National Geographic that explains it.

Basically, dogs know that we’re not dogs; they behave differently around us than other dogs. But cats, they behave similarly with humans as they would with other cats. They knead us, purr, rub up on us, and raise their tails to us like they would to their mothers. They just know we’re bigger and clumsier. And that’s probably pretty accurate. Whenever we do fall off things we tend not to land on our feet.

So in response to our article on the greatest Dog quotes of all time, we thought we’d do another one on our other favorite furry friends. So grab your favorite feline and enjoy these 25 quotes that only cat lovers will understand.

On cats and dogs:

1)  “If animals could speak, the dog would be a blundering outspoken fellow; but the cat would have the rare grace of never saying a word too much.” – Mark Twain

Our thought: Cats would be very graceful indeed. Quite. 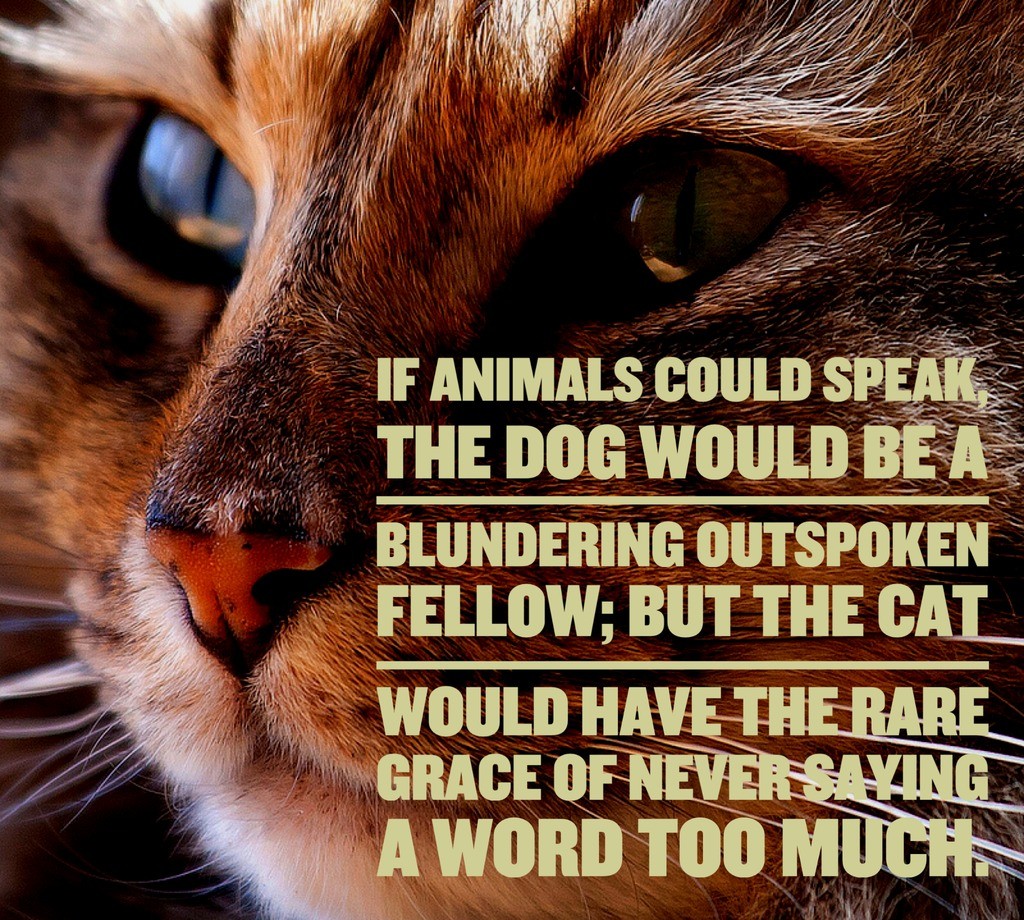 2)  “If a dog jumps in your lap, it is because he is fond of you; but if a cat does the same thing, it is because your lap is warmer.” – Alfred North Whitehead

Our thought: We take this as cats just knowing what they want and going for it. Or being selfish. Either way. 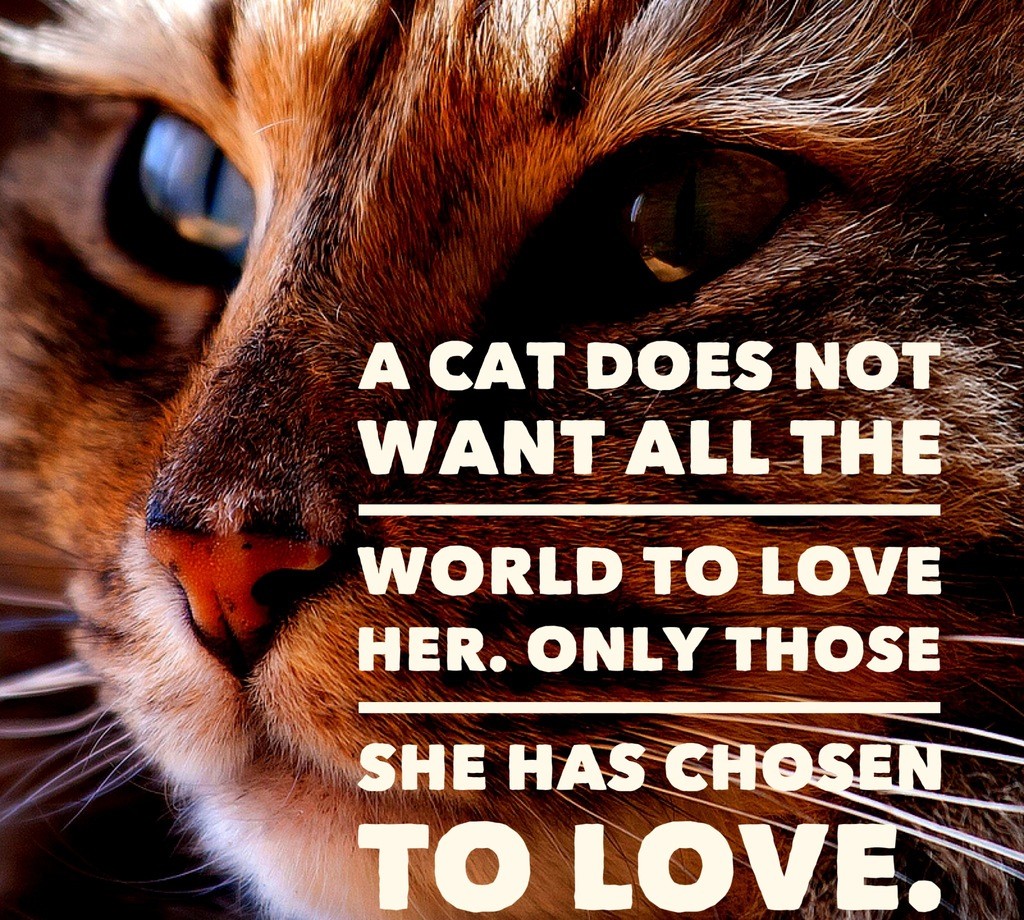 3)   “Women and cats will do as they please, and men and dogs should relax and get used to the idea.” – Robert A. Heinlein

4)    “I have studied many philosophers and many cats. The wisdom of cats is infinitely superior.” – Hippolyte Taine

Our thought: In our research we also learned that cats use straightforward learning. Philosophers should probably take note.

5)      “Cats know how to obtain food without labor, shelter without confinement, and love without penalties” – W.L. George

Our thought: Love this quote. Very smart these little guys. We could probably learn a thing or two about love from them. 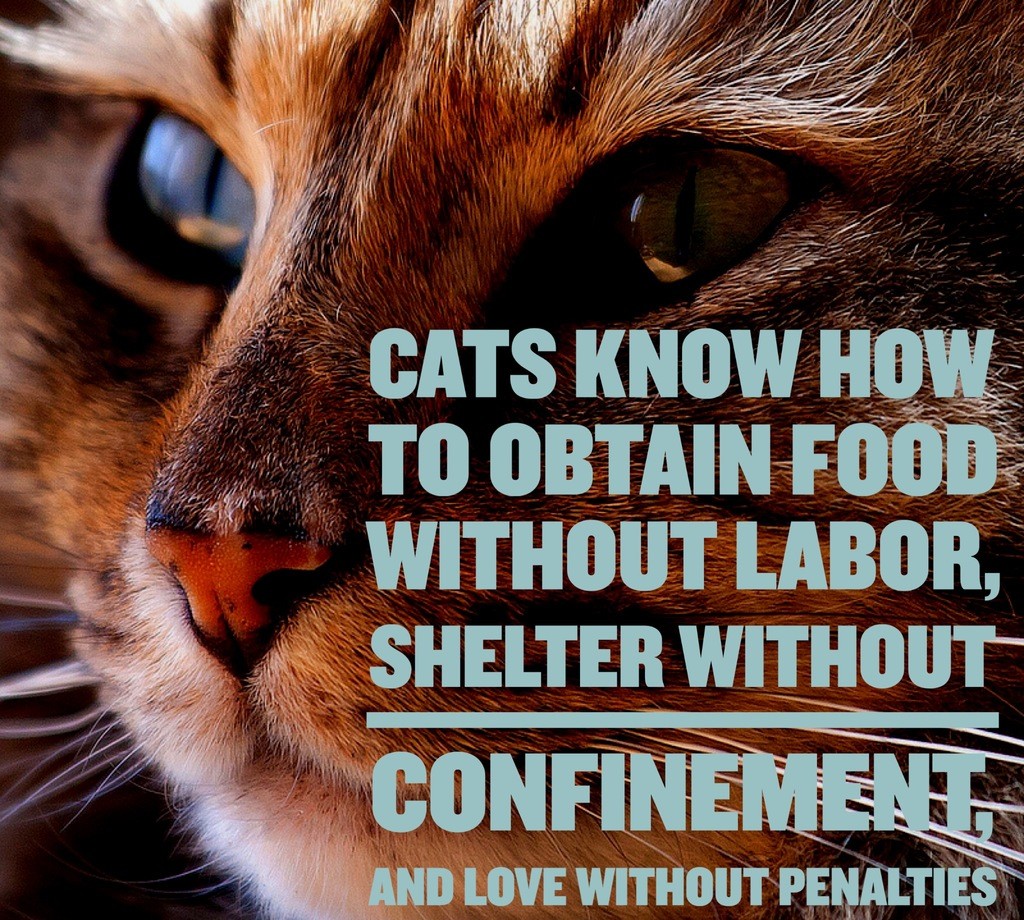 6)  “In nine lifetimes, you’ll never know as much about your cat as your cat knows about you.” – Michel de Montaigne

Our thought: They are much better at observation than we are. Stop and take a look around every once and a while.

Our thought: You won’t win. Period.

8) “I would like to see anyone, prophet, king or God, convince a thousand cats to do the same thing at the same time.” – Neil Gaiman

Our thought: We’d like to see that too. But our money’s on the cats.

9) “Any cat who misses a mouse pretends it was aiming for the dead leaf.” – Charlotte Gray

Our thought: Pretty sure they would be offended and deny everything if we pointed out their misses. 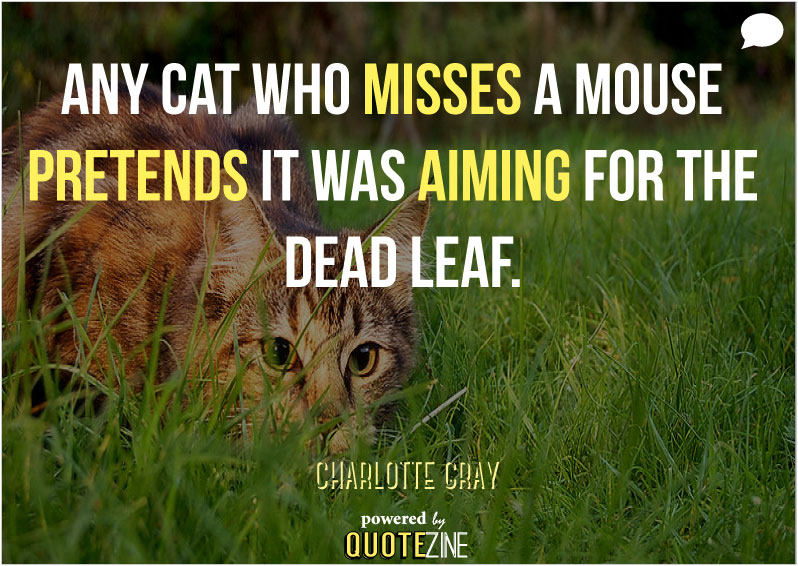 Our thought: Refer back to the Mark Twain quote. Classy as f**k. 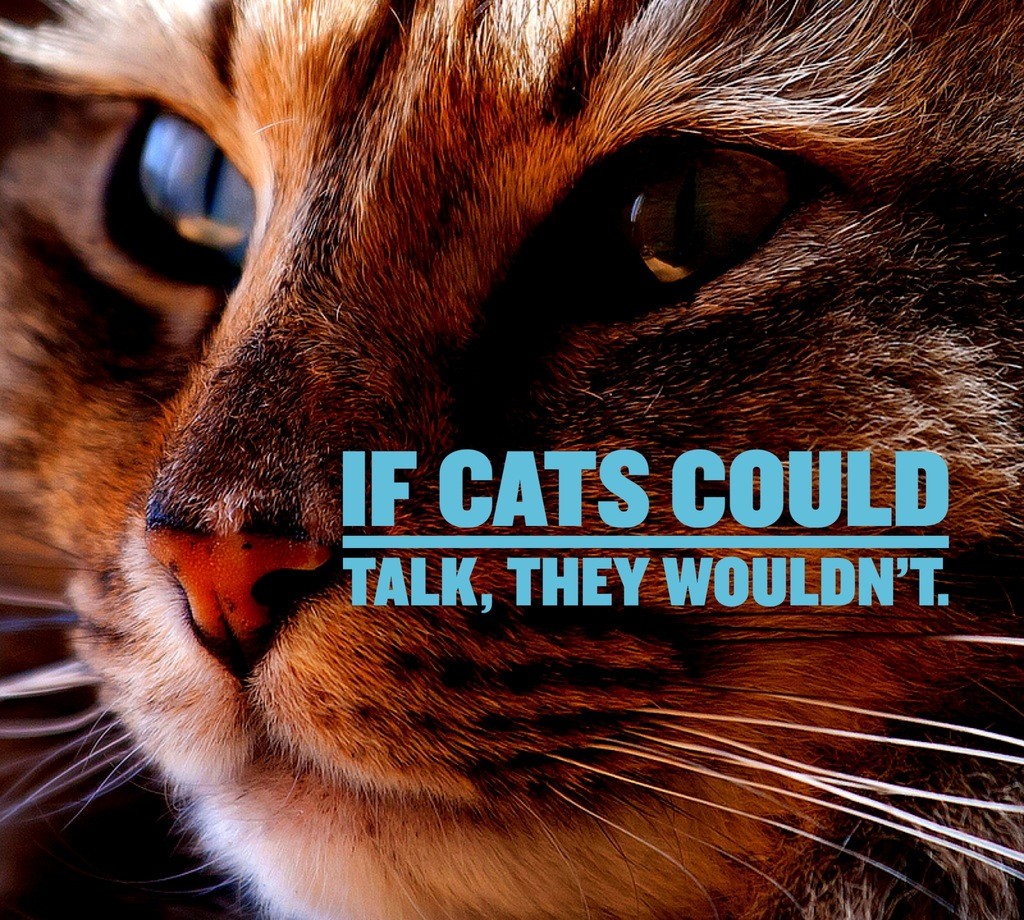 On being little gods:

11)  “I believe cats to be spirits come to Earth. A cat, I am sure, could walk on a cloud without coming through.” – Jules Verne

Our thought: I have yet to see evidence of the contrary.

12)  “In ancient times cats were worshipped as gods; they have no forgotten this.” – Terry Pratchett

Our thought: And they never will.

13)   “How we behave towards cats here below determines our status in Heaven.” – Robert Heinlein

Our thought: They will probably be our rulers some day, so treat them well. They don’t forget.

On doing as they please:

14)   “Cats can work out mathematically the exact place to sit that will cause the most inconvenience.” – Pam Brown

Our thought: Usually the computer. While blogging. Or doing work of any kind. 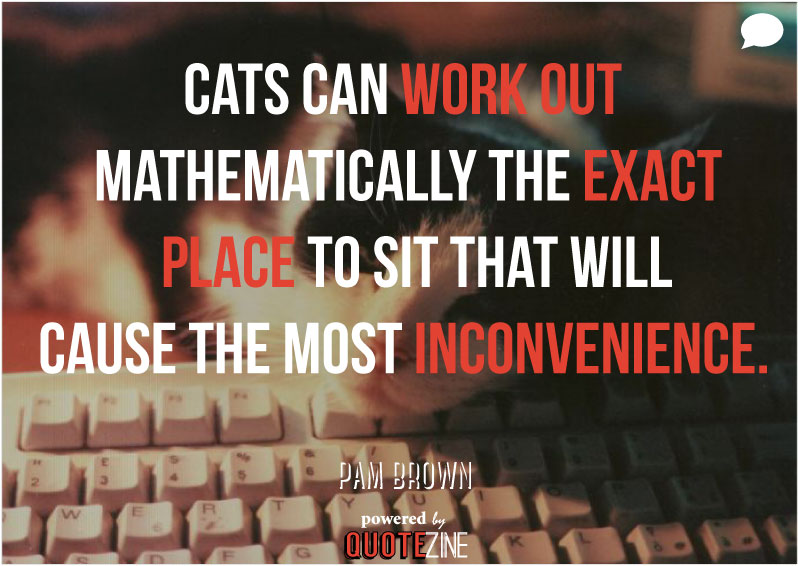 15)   “Cats seem to go on the principle that it never does any harm to ask for what you want.” – Joseph Wood Krutch

Our thought: Not a bad principle. We might try it and see how far we get. 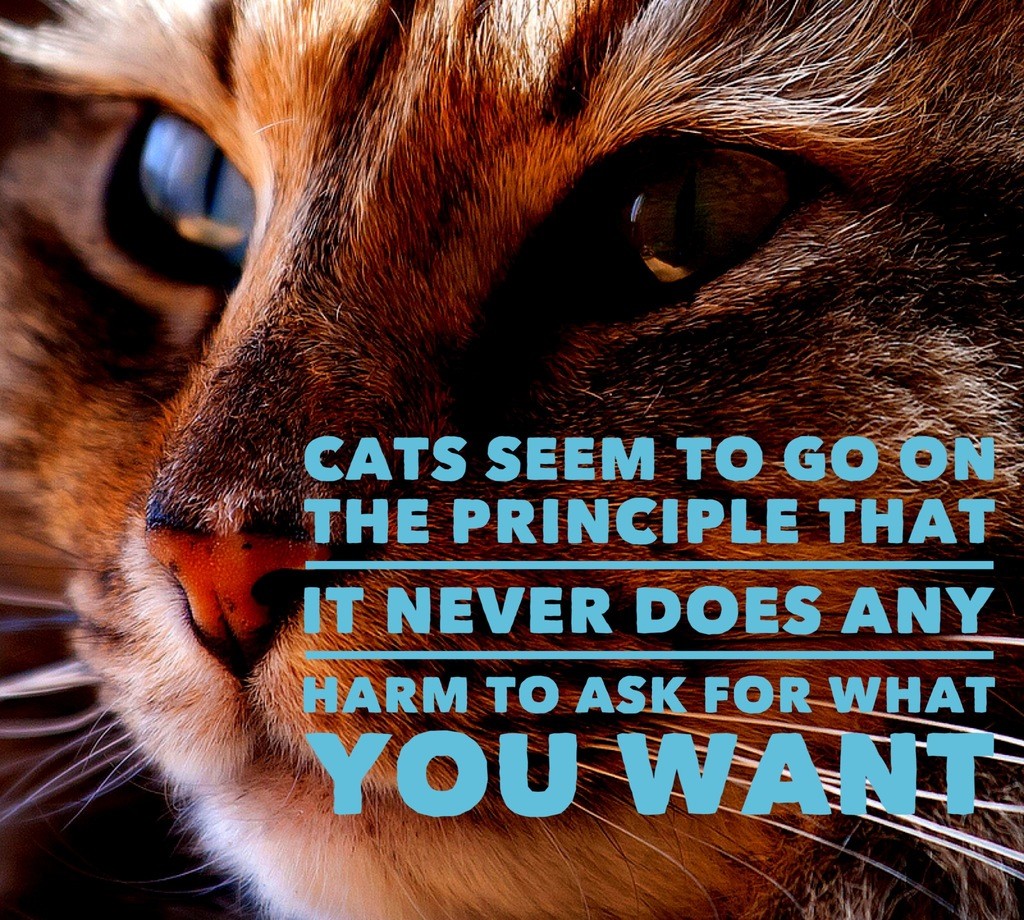 Our thought: She usually has something better to do.

On being little sh**s sometimes:

Our thought: Hilarious. But they’re not nasty… Well, maybe sometimes.

18)   “If you are allergic to a thing, it is best not to put that thing in your mouth, particularly if the thing is cats.” – Lemony Snicket Our thought: Good advice. Do not put a cat in ones mouth.

19)   “A cat has absolute emotional honesty: human beings, for one reason or another, may hide their feelings, but a cat does not.” – Ernest Hemingway

Our thought: They are very honest creatures. It’s refreshing.

20)   “A cat does not want all the world to love her. Only those she has chosen to love.” – Helen Thomson

Our thought: A beautiful quote. We too only want those we love to love us.

Our thought: Cue the cat running viciously back and forth throughout the house at night. 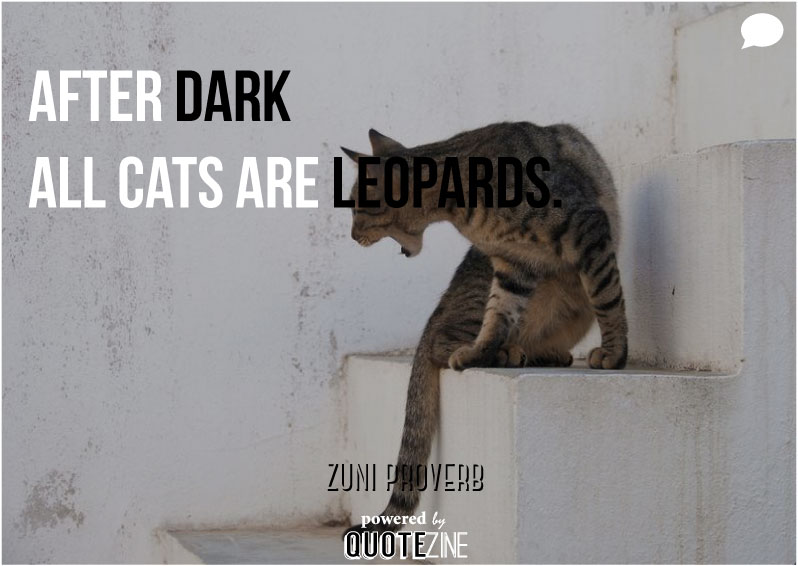 Our thought: We will never know why they do some of the things they do.

And finally, on why we love them:

23)   “There are two means of refuge from the miseries of life: music and cats.” – Albert Schweitzer

Our thought: As a physician and medical missionary to Africa, Mr. Schweitzer must have known what he was talking about.

24)    “No man or women can be called friendless who has the companionship of a cat.” – James Lautner

Our thought: This is in defense of all my ‘cat lady’ friends. 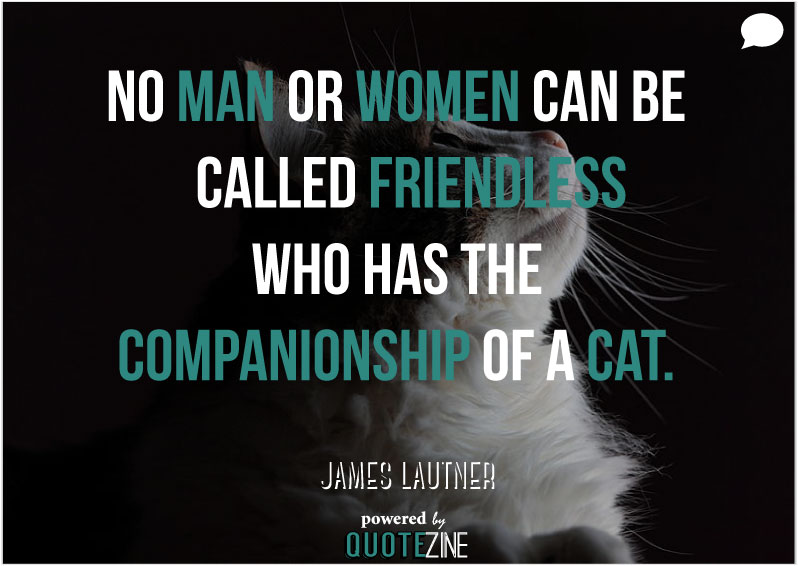 Our thought: It can’t be called procrastination either right? 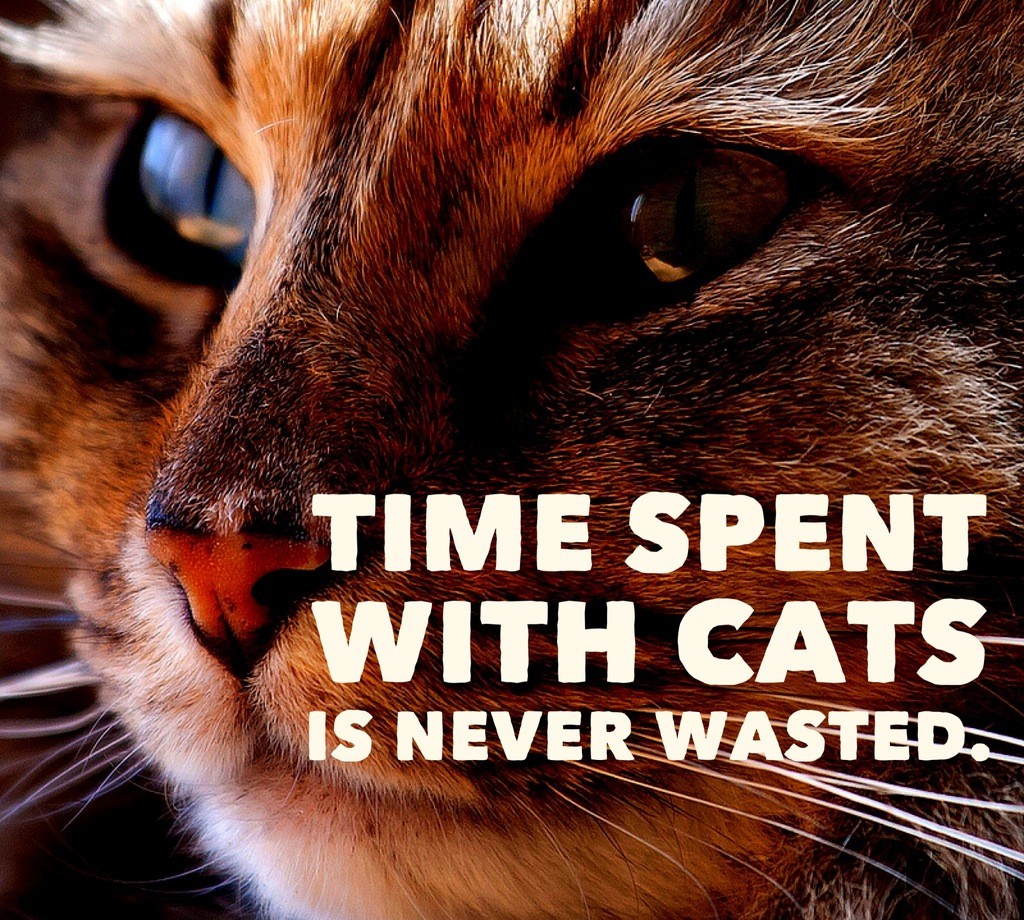 Did you see any funny, crazy or silly quotes about  cats we may have missed?

Are there any better cat gifs or photos you’ve found we haven’t included? Let us know in the comments.